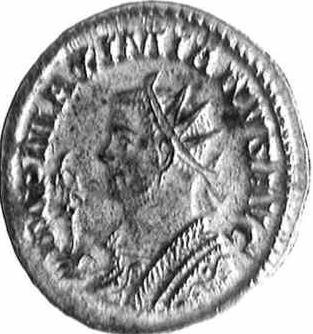 Perhaps born ca. 249/250 A.D. in Sirmium in the area of the Balkans, Marcus Aurelius Valerius Maximianus, more commonly known as Maximianus Herculius, had been a soldier before he put on the purple. A fellow soldier with theEmperor Diocletian, he had served in the military during the reigns of Aurelian and Probus. He may have served under Carus in Mesopotamia in 283 and it was likely that he was with his future co-ruler Diocletian when the latter was proclaimed emperor at Nicomedeia on 20 November 284. His wife Eutropia bore him two children: Maxentius and Fausta. An older daughter, Theodora, may have been a step daughter.[[1]]

When the Emperor Diocletian determined that the empire was too large for one man to govern on his own, he made Maximianus his Caesar in 285/6 and elevated him to the rank of Augustus in perhaps the spring of 286. While Diocletian ruled in the East, Maximian ruled in the West. In 293, in order to maintain and to strengthen the stability of the empire, Diocletian appointed Constantius I Chlorus to serve Herculius as a Caesar in the West, while Galerius did the same job in the East. This arrangement, called the "Tetrarchy", was meant not only to provide a stronger foundation for the two emperors' rule, but also to end any possible fighting over the succession to the throne once the two senior Augusti had left the throne--a problem which had bedeviled the principate since the time of the Emperor Augustus. To cement the relationship between Herculius and his Caesar, Constantius married Maximianus' elder daughter Theodora. A decade later, Constantius' son Constantine would marry Herculius' younger daughter Fausta.[[2]]

To a large degree, Herculius spent the early years of his reign engaging in lackluster campaigning. Although he was able to quell the Bagaudae fairly easily in 286, it was with some measure of difficulty that he put down a German invasion of Gaul in the fall of the same year. Additionally, he appointed Carausius to command his navy and to defeat the pirates; because of certain financial irregularities that had occurred during his successful tour, Carausius revolted and declared himself emperor. Britain and the northern part of Gaul sided with the usurper. On his own, Maximanus was unable to repress him; he and his Praetorian Prefect Constantius attempted to deal with both the on-going problem of Carausius and the continued Germanic incursions of his realm. As soon as Constantius was appointed Caesar in 293, he recovered northern Gaul after he defeated Carausius near Bononia and repressed any sparks of rebellion in the region. It was not until 296, however, that the Caesar was able to recover Britain by defeating Carausius' successor Allectus; while he campaigned in Britain, Maximianus stood watch on the Rhine. Between 297 and 299 the Augustus seems to have fought the Moors in Spain and taken the offensive against African tribes in the general area of Carthage. The emperor appears to have spent the remainder of his reign in a state of indolence in Milan or Aquileia and was content to allow Constantius to shoulder the real burdens of state including, among other things, the German threat.[[3]]

In political matters, the emperor and his Caesar were very different. Maximianus was allegedly very heavy handed when dealing with members of the Roman Senate, whereas his Caesar's relationship with the patricians was apparently fairly good. Surprisingly, when faced with the edicts which provided the legal foundation for the "Great Persecution" in 303, both Maximianus Herculius and Constantius seem to have been more moderate in their dealings with Christians than Diocletian and Galerius who rigorously enforced the laws in the Eastern portion of the empire. The Caesar limited his actions to the demolition of churches.[[4]]

On 1 May 305 Diocletian, at Nicomedeia, and Maximianus Herculius, at Mediolanum, divested themselves of the purple. Their resignations seem largely due to the almost fatal illness that Diocletian contracted toward the end of 304. Diocletian seems to have forced his colleague to abdicate. In any case, Herculius had sworn an oath at the temple of Capitoline Jupiter to carry out the terms of the abdication. Constantius and Galerius were appointed as Augusti, with Maximinus Daia and Severus as the new Caesars. The retired emperors then returned to private life. Diocletian's retirement was at Salonae in Dalmatia, while Herculius' retreat was either in Lucania or Campania.[[5]]

Herculius' retirement, however, was of short duration because, a little more than a year later on 28 October 306, his son Maxentius was proclaimed emperor at Rome. To give his regime an aura of legitimacy, Maximianus was forced to affirm his son's acclamation. When Galerius learned of Maxentius' rebellion, he sent Severus against him with an army that had formerly been under his father's command. Maxentius invested his father with the purple again to win over his enemy's troops, a ruse which succeeded. Perhaps to strengthen his own position, in 307 he went to Gaul and married his daughter Fausta to Constantine. When Constantine refused to become embroiled in the civil war between Galerius and Maxentius, Herculius returned to Rome in 308 and attempted to depose his son; however, he did not succeed. When he was unable to convince Diocletian to take up the purple again at a meeting in Carnuntum in late 308, he returned to his son-in-law's side in Gaul. Although he was treated with all of the respect due a former emperor, he still desired to be more than a figurehead. He decided to seize the purple from Constantine when his son-in-law least expected it. His opportunity came in the summer of 310 when the Franks revolted. When Constantine had taken a small part of his army into enemy territory, Maximianus proclaimed himself again emperor and paid the soldiers under his command a donative to secure their loyalty. As soon as Constantine received news about Maximianus' revolt in July 310, he went south and reached Arelate before his father-in-law could mount a defense of the city. Although Maximianus fled to Massilia, his son-in-law seized the city and took Maximianus prisoner. Although he was deprived of the purple, he was granted pardon for his crimes.[[6]] Unable to endure the humiliation of his defeat, he attempted to have Constantine murdered in his bed. The plot failed because he tried to get his daughter Fausta's help in the matter; she chose to reveal the matter to her husband. Because of this attempt on his son-in-law's life Maximianus was dead by the end of July either by his own hand or on the orders of his intended victim.[[7]]

Eutropia was of Syrian extraction and her marriage to Maximianus Herculius seems to have been her second. She bore him two children: Maxentius and Fausta. An older daughter, Theodora, may have been a product of her first marriage. Fausta became the wife of Constantine I , while her sister Theodora was the second spouse of his father Constantius I Chlorus . She apparently survived all her children, with the possible exception of her daughter Fausta who seems to have died in 326, and was alive in 325. She is also said to have become a Christian.