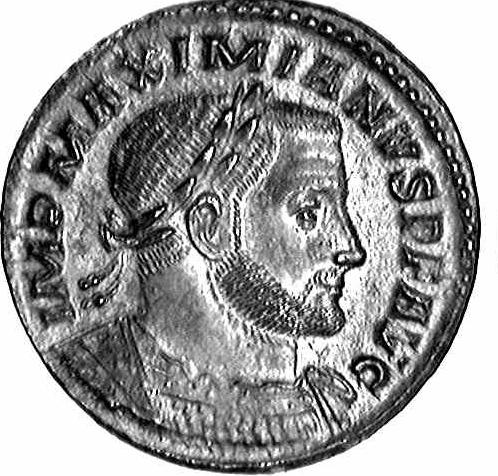 Caius Galerius Valerius Maximianus, more commonly known as Galerius, was from Illyricum; his father, whose name is unknown, was of peasant stock, while his mother, Romula, was from beyond the Danube. Galerius was born in Dacia Ripensis near Sardica. Although the date of his birth is unknown, he was probably born ca. 250 since he served under Aurelian. As a youth Galerius was a shepherd and acquired the nickname Armentarius. Although he seems to have started his military career under Aurelian and Probus, nothing is known about it before his accession as Caesar on 1 March 293. He served as Diocletian's Caesar in the East. Abandoning his first wife, he married Diocletian's daugher, Valeria.[[1]]

As Caesar he campaigned in Egypt in 294; he seems to have taken to the field against Narses of Persia, and was defeated near Ctesiphon in 295. In 298, after he made inroads into Armenia, he obtained a treaty from the Persians favorable to the Romans. Between 299-305 he overcame the Sarmatians and the Carpi along the Danube.[[2]] The Great Persecution of the Orthodox Church, which was started in 303 by the Emperor Diocletian, was probably instigated by Galerius.[[3]] Because of the almost fatal illness that he contracted toward the end of 304, Diocletian, at Nicomedeia, and Maximianus Herculius, at Mediolanum, divested themselves of the purple on 1 May 305. Constantius and Galerius were appointed as Augusti, with Maximinus Daia and Severus as the new Caesars. Constantius and Severus reigned in the West, whereas Galerius' and Daia'srealm was the East. Although Constantius was nominally senior Augustus, the real power was in the hands of Galerius because both Caesars were his creatures.[[4]]

The balance of power shifted at the end of July 306 when Constantius, with his son Constantine at his side, passed away at York in Britain where he was preparing to face incursions by the Picts; his army proclaimed Constantine his successor immediately. As soon as he received the news of the death of Constantius I and the acclamation of Constantine to the purple, Galerius raised Severus to the rank of Augustus to replace his dead colleague in August 306. Making the best of a bad situation, Galerius accepted Constantine as the new Caesar in the West. The situation became more complicated when Maxentius, with his father Maximianus Herculius acquiesing, declared himself princeps on 28 October 306. When Galerius learned about the acclamation of the usurper, he dispatched the Emperor Severus to put down the rebellion. Severus took a large field army which had formerly been that of Maximianus and proceeded toward Rome and began to besiege the city, Maxentius, however, and Maximianus, by means of a ruse, convinced Severus to surrender. Later, in 307, Severus was put to death under clouded circumstances. While Severus was fighting in the west, Galerius, during late 306 or early 307, was campaigning against the Sarmatians.[[5]]

In the early summer of 307 Galerius invaded Italy to avenge Severus's death; he advanced to the south and encamped at Interamna near the Tiber. His attempt to besiege the city was abortive because his army was too small to encompass the city's fortifications. Not trusting his own troops, Galerius withdrew. During its retreat, his army ravaged the Italian countryside as it was returning to its original base. When Maximianus Herculius' attempts to regain the throne between 308 and 310 by pushing his son off his throne or by winning over Constantine to his cause failed, he tried to win Diocletian and Galerius over to his side at Carnuntum in October and November 308; the outcome of the Conference at Carnuntum was that Licinius was appointed Augustus in Severus's place, that Daia and Constantine were denoted filii Augustorum, and that Herculius was completely cut out of the picture. Later, in 310, Herculius died, having been implicated in a plot against his son-in-law.[[6]] After the Conference at Carnuntum, Galerius returned to Sardica where he died in the opening days of May 311..[[7]]