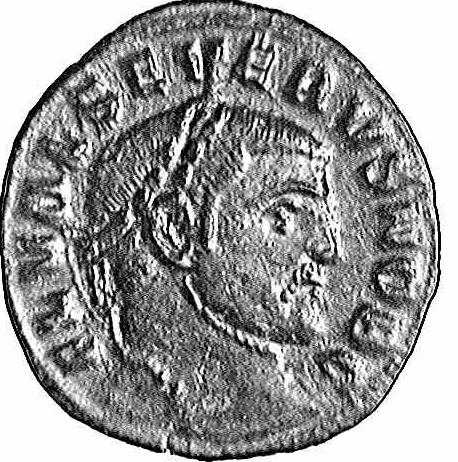 Flavius Valerius Severus was of humble origin and from Illyricum. Early in his career he had held a military command. When Diocletian, at Nicomedeia, and Maximianus Herculius, at Mediolanum, divested themselves of the purple (Milan) on 1 May 305, they appointed Constantius I and Galerius as Augusti in their place, with Severus and Maximinus Daia as the new Caesars. Both Caesars were Galerius' creatures and received their appointment at his hands. Constantius I and Severus ruled the west, while Galerius and Daia controlled the east.[[1]]

When Galerius learned of the death of Constantius I in August 306 and the acclamation of Constantine to the purple, he raised Severus to the rank of Augustus to replace the dead Augustus. Matters went from bad to worse for Galerius when Maxentius, the son of Maximianus Herculius, was proclaimed emperor at Rome on 28 October 306. Galerius was disturbed when he heard the news of Maxentius' revolt because the usurper seized Rome, then part of Severus' realm. Galerius sent Severus from Mediolanum (Milan) to fight the enemy. Severus took a large field army which had formerly been that of Maximianus and proceeded toward Rome.[[2]]

When Maxentius learned about the advance of Severus, he sent his own father the purple and offered to make him Augustus again to win Severus' army to his side; Maximianus accepted his offer. Meanwhile, Severus and his army reached Rome and began to besiege the city; Maxentius, however, bribed Severus' soldiers and, at a set signal, the Augustus' forces joined the usurper. Severus fled ro Ravenna with a few remaining soldiers. Maximianus went to Ravenna and, with false promises of safety, convinced Severus to surrender. He took this action because he realized that Severus' position was impregnable. Under house arrest Severus was brought to Rome and imprisoned at Tres Tabernae. Severus was put to death in 307 under clouded circumstances, when Galerius invaded Italy.[[3]]