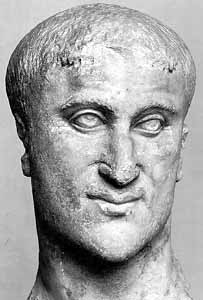 Born March 31st, Emperor Flavius Valerius Constantius may have come into the world ca. 250. His family was from Illyricum. In the army he served as a protector, tribunus, and a praeses Dalmatiarum. During the 270s or the 280s, he became the father of Constantine by Helena, his first spouse. By 288 he was the Praetorian Prefect of the western emperor Maximianus Herculius.[[1]]

On 1 March 293 Diocletian appointed Galerius as his Caesar (junior emperor) in the east and Constantius as the Caesar of Maximianus Herculius. Caesar in the west. Both Caesars had the right of succession. In order to strengthen the dynastic relationship between himself and Herculius., Constantius put aside his wife Helena and married Theodora, the daughter, or perhaps stepdaughter, of Maximianus Herculius.. The union was fruitful and of it there were six issue: Flavius Dalmatius, Julius Constantius, Hannibalianus, Constantia, Anastasia, and Eutropia. To strengthen his bond with Galerius and Diocletian in the east, Constantius allowed Galerius to keep his son Constantine as a hostage for his good behavior.[[2]]

In the remainder of the time that he was a Caesar, Constantius spent much of his time engaged in military actions in the west. In the summer of 293 Constantius expelled the troops of the usurper Carausius from northern Gaul; after Constantius' attack on Bononia (Boulogne), Carausius was murdered. At the same time he dealt with the unrest of the Germans. In 296 he invaded Britain and put down the revolt of the usurper Allectus. Between 300 and 305 A.D. the Caesar campaigned successfully several times with various German tribes.[[3]] It is worth noting in passing, that while his colleagues rigidly enforced the "Great Persecution in 303," Constantius limited his action to knocking down a few churches.[[4]]

Constantius as Augustus and His Untimely Death

On 1 May 305 Diocletian, at Nicomedia, and Maximianus Herculius, at Mediolanum (Milan), divested themselves of the purple, probably because of the almost fatal illness that Diocletian contracted toward the end of 304. Diocletian forced Maximianus to abdicate. They appointed as their successors Constantius and Galerius, with Severus and Maximinus Daia as the new Caesars. The retired emperors then returned to private life. Constantius, as had his predecessor, ruled in the west, while Galerius and Daia ruled in the east.[[5]] Almost as soon as he was appointed Augustus, he crossed to Britain to face incursions by the Picts where he died at York on 25 July 306 with his son at his side.[[6]]

For a discussion of Constantius' marriage to Helen, see infra, n.2.

Barnes has summarized the problems and the sources surrounding the marriages of Constantius to Helen and to Theodora (New Empire), 33, 36-37.

[[3]]Constantius' campaigns are discussed by Barnes, Constantine and Eusebius, 15ff, and by Harold Mattingly and B.H. Warmington, OCD,2 s.v."Constantius (Chlorus)," 281-282.

[[5]]For a listing of sources which treat the acclamation of Constantius to the rank of Augustus, see Barnes, New Empire, 4ff.

[[6]]For a discussion of the death of Constantius and the sources that treat it, see DiMaio, 96ff.