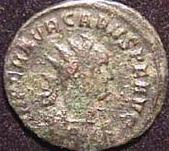 The origins of the Emperor Carus remain unclear. The Historia Augusta spins a complex fable that can largely be discounted.[[1]] Most sources agree that he was born in Narbo, thus breaking the pattern of Illyrian-born emperors. His age at accession in 282 can only be inferred from the certain knowledge that he possessed two grown sons and a grandson. This would seem to indicate that he was born about 230.[[2]] His name, before his accession, may have been M. Numerius Carus.[[3]]

A passage from the Historia Augusta includes him in a list of generals trained in military precepts by Probus. He was certainly sufficiently trusted by Probus to be his Praetorian Prefect in 282. Such trust may have been misplaced. In September 283, he succeeded to power.[[4]] John of Antioch and Zonaras record a tradition that he revolted against Probus.[[5]] Other sources suggest that he was proclaimed by his troops upon Probus' unexpected murder.[[6]]  The former account is more probable. Despite the tradition to the contrary, Probus' reign was uneasy and punctuated with strife. Carus' rebellion was just one too many.

In all likelihood, Carus assumed the consulship for the remainder of the year after  Probus' death. He also immediately raised his son Carinus to the rank of Caesar and both were nominated for the ordinary consulship for the following year. His tasks were immediate: a campaign against the Quadi and Sarmatians, [[7]] from which he took the title Germanicus Maximus, [[8]] and the great war of revenge against Persia. He proceeded to the east, taking with him his younger son Numerian, now proclaimed Caesar. Carinus remained behind with the rank of Augustus.

In his brief tenure as emperor, Carus continued the policy of military renovation commenced by Claudius II and Aurelian. Unlike his immediate predecessors, he could also associate members of his family in his rule. That enabled him to pursue a protracted campaign in the east while Carinus actively guarded the frontiers of the west. Carus sought to strengthen his position further by arranging a match between Numerian and the daughter of Flavius Aper, his Praetorian Prefect.

During the course of 283, Carus pursued a successful war against the Persians. A stray reference from Sidonius Apollinaris indicates that he invaded by way of Armenia.[[9]] He then marched down the Tigris. The Persian Great King Vahram II, distracted by domestic challenge to his authority, was in no position to mount a concerted opposition.[[10]] Carus' forces reached the Persian capital, Ctesiphon and, indeed, went beyond it.[[11]] The achievement was signal. The title Persicus Maximus was added to the imperial formula. [[12]]  This advertised to all the avenging of the defeats of earlier years. At the height of this success, however, Carus suddenly died in late July or early August 283.[[13]] The circumstances are confused and mysterious.[[14]] Illness is the most plausible explanation for his end. Although several ancient sources suggest that a bolt of lightning caused Carus' death, the likelihood of this is obviously very slim. Likewise, since the army had just won a great victory, it also seems improbable that he was assassinated in the camp. The orderly succession of his son Numerian as Augustus suggests that Carus died naturally of illness as one source, Cedrenus, suggest.[[15]]

[[5]] A Greek tradition, represented by Zonaras ( 12.29 ) and John of Antioch ( 160 ) attests that Carus was proclaimed Augustus against his will and sought advice and aid from Probus before Probus' troops took matters into their own hands. This is far outweighed by the testimony of the Latin sources, who mention no such correspondence, and the Anonymous Continuator of Cassius Dio, who quite specifically ascribes responsibility for the revolt to Carus ( fr. 11 ). For a full discussion of the tradition, see P. Meloni, (1948) pp. 46 - 53.