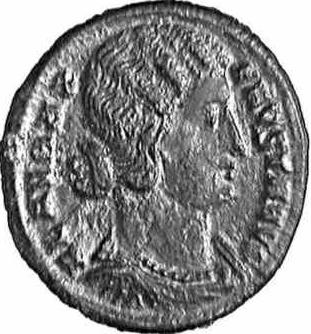 Fausta's full name was Flavia Maxima Fausta.[[1]] She was the daughter of the emperor Maximian and his Syrian wife Eutropia.[[2]] The date of her birth has been the subject of scholarly debate.[[3]] She was born and raised in Rome.[[4]]

In 307 Fausta was married to the emperor Constantine.[[5]] An anonymous Gallic orator composed a panegyric for the occasion.[[6]] The marriage quite possibly took place at Trier.[[7]] Although both Constantine's and Fausta's specific dates of birth are subject to question, it is certain that he was her senior by fifteen or more years. Constantine's drive for sole power must have put a strain on the relationship on at least two occasions. In 310, when Maximian plotted against Constantine, Fausta revealed the plot, thus contributing to her own father's end.[[8]] On 28 October 312 Fausta's brother, the emperor Maxentius, suffered defeat and lost his life in the famous Battle of the Milvian Bridge. The next day his body was recovered from the Tiber River. Constantine had the severed head affixed to a pike and carried through the streets of Rome.[[9]] We do not know Fausta's reaction to this act of brutality.

Fausta was mother to three sons and two daughters. The three sons were Constantine II, born on 7 August 316 (?), Constantius II, born on 7 August 317, and Constans, born in 320 or 323.[[10]] These three were appointed Caesars on 1 March 317, 8 November 324, and 25 December 333, respectively.[[11]] The two daughters were Constantina (not to be confused with Constantine's half-sister Constantia) and Helena (not to be confused with Constantine's mother and Crispus' wife of the same name). We do not know the years of their birth, only that Constantina was the older one of the two.[[12]] As the emperor's wife Fausta held the rank of nobilissima femina.[[13]] Not too long after his victory over Licinius, that is in 324 or 325, Constantine granted her the rank of Augusta,[[14]] as he also did to his mother Helena[[15]]

Fausta's life ended in a most unfortunate way. Her own husband ordered her to be executed in 326, shortly after he had his son Crispus executed.[[16]] We even learn the means of execution: she was suffocated in an over-heated bath.[[17]] Two later sources, Zosimus and Zonaras, report that Fausta and Crispus were involved with each other in an illicit Phaedra-and-Hippolytus type of relationship.[[18]] We may entertain doubts about the nature of their offense and also about the means of Fausta's execution.[[19]] But the two deaths are so close together in time and our sources so unanimous on this point that there must be some connection between the two cases.[[20]] We shall not be surprised to find that Fausta suffered damnatio memoriae.[[21]]

We must deny any validity to Zosimus'[[22]] claim that Constantine was driven to accept Christianity by a sense of guilt over his deeds. A similar claim had already been made by Julian the Apostate.[[23]] That Fausta and Crispus together plotted treason is reported by Gregory of Tours,[[24]] but is very unlikely: what would have been their common interest? It has also been claimed that Fausta took her own life;[[25]] there is no support for this claim in any of our sources. Nor do our sources say where Fausta met her end.[[26]] Strangely enough, Julian the Apostate has words of high praise for Fausta in the panegyric which he addressed to Constantius II, probably in 355.[[27]] Did Constantius II try to restore his mother's honor?

Recent and concise accounts of the life of Fausta, with reference to the scattered primary sources, are the following:

More extensive or specialized studies are:

Additionally references to Fausta will be found in all of the books on Constantine.

There is some reason to think that Fausta was the stepmother rather than birth mother of Constantinus II, but Guthrie, "The Execution of Crispus" 330-31, has argued to the contrary. See the discussion in Rougé, "Fausta, femme de Constantin" 16-17. Zosimus, 2.39.1, is certainly wrong in reporting that all three of the sons were born by a woman other than Fausta.

DiMaio and others have argued that that Constantine II was born in the summer of 316 without specifying a particular date, but accept the traditional dating of Constantius II's birth to 7 August 317 (Michael DiMaio, Jörn Zeuge, and Jane Bethune, "The Proelium Cibalense et Proelium Campi Ardiensis: The First Civil War of Constantine I and Licinius I," AncW, 21[1990] 90).

[[17]]Aur. Vict. Epit. 41.11-12; We need give little credence to John Chrysostom, In Ep. ad Phil. Comm. 4.15.5 (Migne, PG LXII 295), who claims to know that Fausta was bound naked to the mountains and exposed to the wild beasts. John Holland Smith, Constantine the Great (London, 1971) 215, misreading John Chrysostom, transfers the scene to the amphitheater.

Copyright (C) 1997, Hans A. Pohlsander. This file may be copied on the condition that the entire contents, including the header and this copyright notice, remain intact.