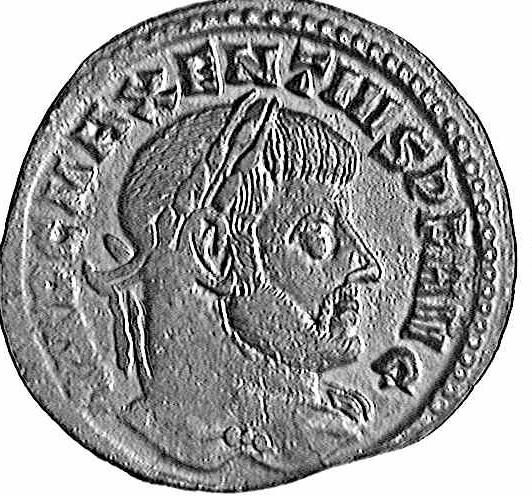 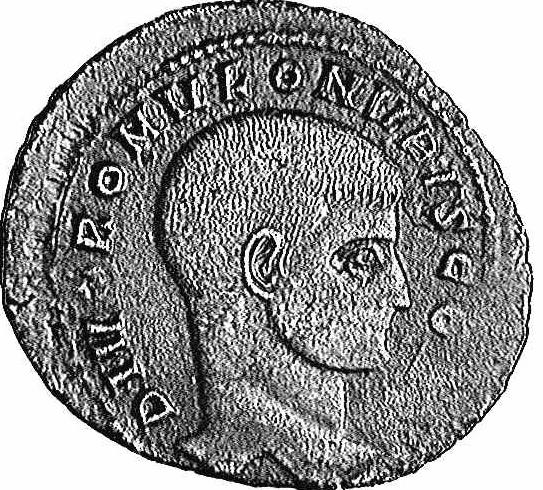 Marcus Aurelius Valerius Maxentius, more commonly known as Maxentius, was the child of the Emperor Maximianus Herculius and the Syrian Eutropia; he was born ca. 278 A.D. After Galerius' appointment to the rank of Caesar on 1 March 293, Maxentius married Galerius' daughter Valeria Maximilla, who bore him a son named Romulus and another son whose name is unknown. Due to his haughty nature and bad disposition, Maxentius could seldom agree with his father or his father-in-law; Galerius' and Maximianus Herculius' aversion to Maxentius prevented the young man from becoming a Caesar in 305. Little else is known of Maxentius' private life prior to his accession and, alth ough there is some evidence that it was spent in idleness, he did become a Senator. [[1]]

On 28 October 306 Maxentius was acclaimed emperor, although he was politcally astute enough not to use the title Augustus; like the Emperor Augustus, he called himself princeps. It was not until the summer of 307 that he started usi ng the title Augustus and started offending other claimants to the imperial throne. He was enthroned by the plebs and the Praetorians. At the time of his acclamation Maxentius was at a public villa on the Via Labicana. He strengthened his position with promises of riches for those who helped him obtain his objective. He forced his father Maximianus Herculius to affirm his son's acclamation in order to give his regime a facade of legitimacy. His realm included Italy, Africa, Sardinia, and Corsica. As soon as Galerius learned about the acclamation of Herculius' son, he dispatched the Emperor Severus to quell the rebellion. With the help of his father and Severus' own troops, Maxentius' took his enemy prisoner.[[2]]

When Severus died, Galerius was determined to avenge his death. In the early summer of 307 the Augustus invaded Italy; he advanced to the south and encamped at Interamna near the Tiber. His attempt to besiege the city was abortive because his army was not large enough to encompass the city's fortifications. Negotiations between Maxentius and Galerius broke down when the emperor discovered that the usurper was trying to win over his troops. Galerius' troops were open to Maxentius' promises because they were fighting a civil war between members of the same family; some of the soldiers went over to the enemy. Not trusting his own troops, Galerius withdrew. During its retreat, Galerius' army ravaged the Italian countryside as it was returning to its original base. If it was not enough that Maxentius had to deal with the havoc created by the ineffectual invasions of Severus and Galerius, he also had to deal with his father's attempts to regain the throne between 308 and 310. When Maximianus Herculius was unable to regain power by pushing his son off his throne, he attempted to win over Constantine to his cause. When this plan failed, he tried to win Diocletian over to his side at Carnuntum in October and November 308. Frustrated at every turn, Herculius returned to his son-in-law Constantine's side in Gaul where he died in 310, having been implicated in a plot against his son-in-law.[[3]] Maxentius' control of the situation was weakened by the revolt of L. Domitius Alexander in 308. Although the revolt only lasted until the end of 309, it drastically cut the size of the grain supply availble for Rome.[[4]] Maxentius' rule collapsed when he died on 27 October 312 in an engagement he had with the Emperor Constantine at the Milvian Bridge after the latter had invaded his realm. [[5]]

Valeria Maximilla was the daughter of the Emperor Galerius and his first wife whose name is unknown. She married the usurper Maxentius and bore him two sons. Only Valerius Romulus, the eldest of the two sons, born ca. 294, is known by name. Because she was an emperor's daughter, shewas entitled nobilissima femina. She and her husband were together before the Battle of the Milvian Bridge when she disappears from the historical record. Her fate is unknown.

Their son Romulus was entitled clarissimus puer and, later, nobilissimus vir. He served twice as consul with his father in 308 and in 309. He must have died in 309 because his father was sole consul in 310.

Cullhed, Mats. Conservator Urbis Suae: Studies in the Politics and Propoganda of the Emperor Maxentius. Stockholm, 1994.