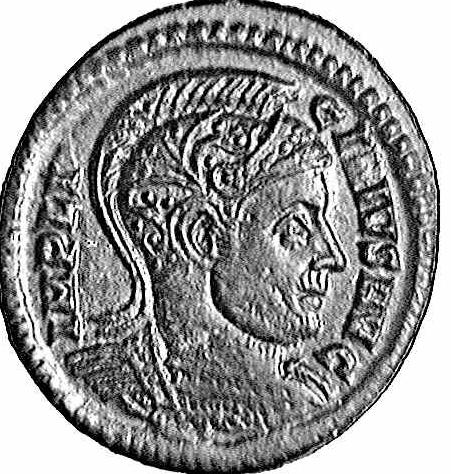 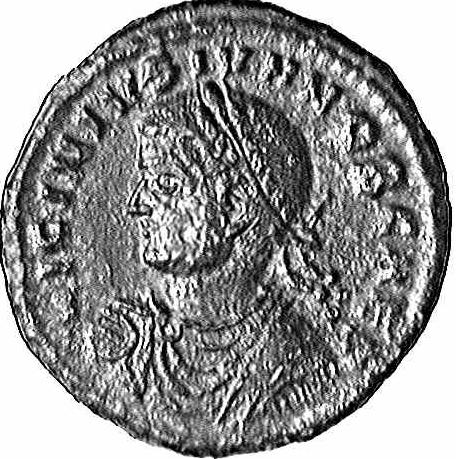 Valerius Licinianus Licinius, more commonly known as Licinius, may have been born ca. 265. Of peasant origin, his family was from Dacia. A close friend and comrade of arms of the Emperor Galerius, he accompanied him on his Persian expedition in 297. When campaigns by Severus and Galerius in late 306 or early 307 and in the summer of 307, respectively, failed to dislodge Maxentius who, with the luke warm support of his father Maximianus Herculius, was acclaimed princeps on 28 October 306, he was sent by the eastern emperor to Maxentius as an ambassador; the diplomatic mission, however, failed because the usurper refused to submit to the authority of his father-in-law Galerius. At the Conference of Carnuntum which was held in October or November of 308, Licinius was made an Augustus on 11 November 308; his realm included Thrace, Illyricum, and Pannonia.[[1]]

Although Licinius was initially appointed by Galerius to replace Severus to end the revolt of Maxentius , Licinius (perhaps wisely) made no effort to move against the usurper. In fact, his first attested victory was against the Sarmatians probably in the late spring, but no later than the end of June in 310. When the Emperor Galerius died in 311, Licinius met Maximinus Daia at the Bosporus during the early summer of that year; they concluded a treaty and divided Galerius' realm between them. It was little more than a year later that the Emperor Constantine defeated Maxentius at the Battle of the Milvian Bridge on 28 October 312. After the defeat of the usurper, Constantine and Licinius met at Mediolanum (Milan) where Licinius married the former's sister Constantia; one child was born of this union: Valerius Licinianus Licinius. Licinius had another son, born of a slave woman, whose name is unknown. It appears that both emperors promulgated the so-called Edict of Milan, in which Constantine and Licinius granted Christians the freedom to practice their faith without any interference from the state.[[2]]

As soon as he seems to have learned about the marital alliance between Licinius and Constantine and the death of Maxentius, who had been his ally, Daia traversed Asia Minor and, in April 313, he crossed the Bosporus and went to Byzantium, which he took from Licinius after an eleven day siege. On 30 April 313 the armies of both emperors clashed on the Campus Ergenus; in the ensuing battle Daia's forces were routed. A last ditch stand by Daia at the Cilician Gates failed; the eastern emperor subsequently died in the area of Tarsus probably in July or August 313. As soon as he arrived in Nicomedeia, Licinius promulgated the Edict of Milan. As soon as he had matters in Nicomedeia straightened out, Licinius campaigned against the Persians in the remaining part of 313 and the opening months of 314.[[3]]

The First Civil War Between Licinius and Constantine

Once Licinius had defeated Maximinus Daia, the sole rulers of the Roman world were he and Constantine. It is obvious that the marriage of Licinius to Constantia was simply a union of convenience. In any case, there is evidence in the sources that both emperors were looking for an excuse to attack the other. The affair involving Bassianus (the husband of Constantius I's daughter Anastasia ), mentioned in the text of Anonymus Valesianus (5.14ff), may have sparked the falling out between the two emperors. In any case, Constantine' s forces joined battle with those of Licinius at Cibalae in Pannonia on 8 October 314. When the battle was over, Constantine prevailed; his victory, however, was Pyrrhic. Both emperors had been involved in exhausting military campaigns in the previous year and the months leading up to Cibalae and each of their realms had expanded so fast that their manpower reserves must have been stretched to the limit. Both men retreated to their own territory to lick their wounds. It may well be that the two emperors made an agreement, which has left no direct trace in the historical record, which would effectively restore the status quo.[[4]]

Both emperors were variously engaged in different activities between 315 and 316. In addition to campaigning against the Germans while residing in Augusta Treverorum (Trier) in 315, Constantine dealt with aspects of the Donatist controversy; he also traveled to Rome where he celebrated his Decennalia. Licinius, possibly residing at Sirmium, was probably waging war against the Goths. Although not much else is known about Licinius' activities during this period, it is probable that he spent much of his time preparing for his impending war against Constantine; the latter,who spent the spring and summer of 316 in Augusta Treverorum, was probably doing much the same thing. In any case, by December 316, the western emperor was in Sardica with his army. Sometime between 1 December and 28 February 317, both emperors' armies joined battle on the Campus Ardiensis; as was the case in the previous engagement, Constantine' s forces were victorious.On 1 March 317, both sides agreed to a cessation of hostilities; possibly because of the intervention of his wife Constantia, Licinius was able to keep his throne, although he had to agree to the execution of his colleague Valens, who the eastern emperor had appointed as his colleague before the battle, as well as to cede some of his territory to his brother-in-law.[[5]]

Licinius and the Christians

Although the historical record is not completely clear, Licinius seems to have campaigned against the Sarmatians in 318. He also appears to have been in Byzantium in the summer of 318 and later in June 323. Beyond these few facts, not much else is known about his residences until mid summer of 324. Although he and Constantine had issued the Edict of Milan in early 313, Licinius turned on the Christians in his realm seemingly in 320. The first law that Licinius issued prevented bishops from communicating with each other and from holding synods to discuss matters of interest to them. The second law prohibited men and women from attending services together and young girls from receiving instruction from their bishop or schools. When this law was issued, he also gave orders that Christians could hold services only outside of city walls. Additionally, he deprived officers in the army of their commissions if they did not sacrifice to the gods. Licinius may have been trying to incite Constantine to attack him. In any case, the growing tension between the two rulers is reflected in the consular Fasti of the period.[[6]]

The Second Civil War Between Licinius and Constantine and Licinius' Death

War actually broke out in 321 when Constantine pursued some Sarmatians, who had been ravaging some territory in his realm, across the Danube. When he checked a similar invasion of the Goths, who were devastating Thrace, Licinius complained that Constantine had broken the treaty between them. Having assembled a fleet and army at Thessalonica, Constantine advanced toward Adrianople. Licinius engaged the forces of his brother-in-law near the banks of the Hebrus River on 3 July 324 where he was routed; with as many men as he could gather, he headed for his fleet which was in the Hellespont. Those of his soldiers who were not killed or put to flight, surrendered to the enemy. Licinius fled to Byzantium, where he was besieged by Constantine. Licinius' fleet, under the command of the admiral Abantus, was overcome by bad weather and by Constantine' s fleet which was under the command of his son Crispus. Hard pressed in Byzantium, Licinius abandoned the city to his rival and fled to Chalcedon in Bithynia. Leaving Martinianus, his former magister officiorum and now his co-ruler, to impede Constantine' s progress, Licinius regrouped his forces and engaged his enemy at Chrysopolis where he was again routed on 18 September 324. He fled to Nicomedeia which Constantine began to besiege. On the next day Licinius abdicated and was sent to Thessalonica, where he was kept under house arrest. Both Licinius and his associate were put to death by Constantine. Martinianus may have been put to death before the end of 324, whereas Licinius was not put to death until the spring of 325. in 324 or 325. Rumors circulated that Licinius had been put to death because he attempted another rebellion against Constantine.[[7]]

Alföldi, A. The Conversion of Constantine and Pagan Rome. Oxford, 1969.

For a listing of the chronology of the reign of Licinius, see Barnes, New Empire, 80ff; for the proper dating of the events between 314 and 317, see infran n. 3-4.

For a listing of the sources that treat the marriage of Licinius and Constantia, see supra, n.1.

For a discussion of Licinius' second child, see Michael DiMaio, Jörn Zeuge, and Jane Bethune, "The Proelium Cibalense et Proelium Campi Ardiensis: The First Civil War of Constantine I and Licinius I," AncW, 21(1990), 90-91.

For a discussion of the Batle of the Milvian Bridge, the sources that treat it, and the character of Maxentius, see Michael DiMaio, Jörn Zeuge, and Natalia Zotov, "Ambiguitas Constantiniana: the Caeleste Signum Dei of Constantine the Great," Byzantion, 58(1989), 333ff.

[[4]]The dating of Constantine's civil wars against Licinius is a major source of debate among scholars which will probably never be resolved; this is due to the fact that the literary, numismatic, and legal evidence is so ambiguous. It has been traditional to date the civil wars between the two rulers to 314 and 324 respectively, following the magisterial arguments of Otto Seeck(Regesten der Kaiser und Päpste für die Jahre 311 bis 476 N. Chr.: Vorarbeit zu einer Prosopographie der christlichen Kaiserzeit, [Stuttgart, 1919], 162ff; idem., RE 13, col. 224.36ff). Based primarily on the numismatic evidence, Patrick Bruun has argued that the campaign of 314 actually occurred in 316(Constantinian Coinage of Arelate, [Helsinki, 1953], 17ff; idem., Studies in Constantinian Chronology, [New York, 1961], 10ff; idem., Roman Imperial Coinage 7: Constantine and Licinius A.D. 313-337, [London, 1966]), a position followed by Barnes("Lactantius and Constantine," Journal of Roman Studies, 63[1973], 36ff; idem., Constantine and Eusebius, 65ff, 318ff, and idem., New Empire, 71ff, 81ff). Following the lead of R. Andreotti(Dizinario epigrafico di antichitâ romane 4, 1000ff), I and others have argued the evidence makes more sense if the first campaign was actually fought in 314 and 316(AncW, 21[1990], 87ff). Pohlsander has challenged some of the conclusions of the aforementioned article (Hans A.Pohlsander, "The Date of the Bellum Cibalense: A Reexamination," AncW 25 (1995), 89-101).

[[5]]For a discussion of the chronology of the period between 315 and 317 and the Battle of the Campus Ardiensis is dicussed by ibid., 79ff.

I and others have written, "Zosimus notes that...Licinius would rule Thrace, the east, and the regions in that area (2.20.1);...Anonymus Valesianus says that Licinius' sphere of influence would include the east, Asia, Thrace, Moesia, and Scythia Minor (5.18)" (ibid, 80, n 127.).

[[6]]For the chronology of the remainder of Licinius' reign, see Barnes, New Empire, 82.

The consular Fasti for the period between 319 and 324 are discussed by Michael DiMaio, Zonaras' Account of the Neo-Flavian Emperors, (Ph.D. diss., University of Missouri-Columbia, 1977), 162-163.