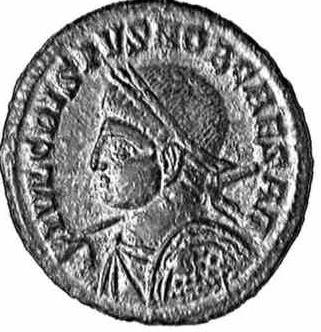 Crispus was the oldest son of the emperor Constantine I and played a fairly important role in the political and military events of the early fourth century. The regular form of his full name is Flavius Iulius Crispus, although the forms Flavius Claudius Crispus and Flavius Valerius Crispus also occur.[[1]] His mother was a woman named Minervina, with whom Constantine had a relationship, probably illegitimate, before he married Fausta in 307.[[2]] When Minervina died or when Constantine put her aside we do not know. Nor do we know when she gave birth to Crispus; we may assume, of course, that it was before 307. Some modern authorities, on good grounds, think that it was in 305.[[3]] Crispus' place of birth must have been somewhere in the East, and it is not known when he was brought to Gaul and when, where, or under what circumstances he was separated from his mother. Constantine entrusted the education of his son to the distinguished Christian scholar Lactantius,[[4]] thereby giving a clear sign of his commitment to Christianity.[[5]] We are not told when Lactantius assumed his duties, but a date before 317 seems likely.[[6]] Nor do we know how successful he was in instilling Christian beliefs and values in his imperial pupil. No later than January of 322 Crispus must have married a woman named Helena -- not to be confused with Constantine's mother or daughter by the same name- and this woman bore him a child in October of 322. Constantine, we learn, was pleased.[[7]]

Crispus' official career began at an early age and is well documented. On March 1 of 317, at Serdica (modern Sofia), his father appointed him Caesar.[[8]] The consulship was his three times,[[9]] in 318, 321, and 324. While nominally in charge of Gaul, with a prefect at his side, he successfully undertook military operations against the Franks and Alamanni in 320 and 323.[[10]] In 324, during the second war between Constantine and Licinius, he excelled as commander of Constantine's fleet in the waters of the Hellespont, the Propontis, and the Bosporus,[[11]] thus making a significant contribution to the outcome of that war. The high points of his career are amply reflected in the imperial coinage.[[12]] In addition to coins, we have his portrait, with varying degrees of certainty, in a number of sculptures, mosaics, cameos, etc.[[13]] Contemporary authors heap praises upon him. Thus the panegyrist Nazarius speaks of Crispus' "magnificent deeds,"[[14]] and Eusebius calls him "an emperor most dear to God and in all regards comparable to his father."[[15]]

Crispus' end was as tragic as his career had been brilliant. His own father ordered him to be put to death.[[16]] We know the year of this sad event, 326, from the Consularia Constantinopolitana,[[17]] and the place, Pola in Istria, from Ammianus Marcellinus.[[18]] The circumstances, however, are less clear. Zosimus (6th c.)[[19]] and Zonaras (12th c.)[[20]] both report that Crispus and his stepmother Fausta were involved in an illicit relationship. There may be as much gossip as fact in their reports, but it is certain that at some time during the same year the emperor ordered the death of his own wife as well,[[21]] and the two cases must be considered together.[[22]] That Crispus and Fausta plotted treason is reported by Gregory of Tours,[[23]] but not very believable. We must resolutely reject the claim of Zosimus[[24]] that it was Constantine's sense of guilt over these deeds which caused him to accept Christianity, as it alone promised him forgiveness for his sins. A similar claim had already been made by Julian the Apostate.[[25]] We must also, I think, reject the suggestion of Guthrie[[26]] that the emperor acted in the interest of "dynastic legitimacy," that is, that he removed his illegitimate first-born son in order to secure the succession for his three legitimate younger sons. But Crispus must have committed, or at least must have been suspected of having committed, some especially shocking offense to earn him a sentence of death from his own father. He also suffered damnatio memoriae,[[27]] his honor was never restored, and history has not recorded the fate of his wife and his child (or children).

Recent and concise accounts of the life and career of Crispus, with reference to the scattered primary sources, are the following:

More extensive or specialized studies are:

Additionally references to Crispus will be found in all of the books on Constantine.

Full discussion in Pohlsander, "Crispus" 81-82, and in König, Origo Constantini 137.

Copyright (C) 1997, Hans A. Pohlsander. This file may be copied on the condition that the entire contents,including the header and this copyright notice, remain intact.