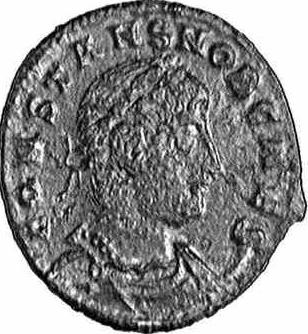 Flavius Julius Constans, third and youngest son of Constantine I and Fausta, was born between 320 and 323 A.D.[[1]] Primary sources for the life and reign of Constans I are scarce.[[2]] To reconstruct his life and career, one must draw on a variety of references in both fourth century and later works. Raised as a Christian, he was made a Caesar on 25 December 333 A.D.[[3]] Constans I and his two brothers, after the death of their father on 22 May 337 and the subsequent "massacre of the princes" in which many other relatives were purged,[[4]] met in the first part of September 337 in Pannonia to re-divide the empire among themselves. There they were acclaimed Augusti by the army.[[5]] Constans' new realm included Italy, Africa, Illyricum, Macedonia, and Achaea. Shortly before his father's death, Constans' engagement to Olympias, the daughter of the Praetorian Prefect Ablabius, was announced; although the match was never solemnized because of political reasons.[[6]]

It would appear that Constans was successful in the military sphere. Following his accession to the purple in 337, he seems to have won a victory over the Sarmatians.[[7]] In 340 Constans was able to beat back an attempt by his brother Constantine II to seize some of his realm. The latter died in a battle fought near Aquileia and Constans absorbed his late brother's territory.[[8]] In 341 and 342 he conducted a successful campaign against the Franci. He also visited Britain in 343, probably on a military campaign.[[9]]

As an emperor Constans gets mixed reviews.[[10]] In what may be a topos, sources suggest that the first part of his reign was moderate but in later years, however, he became overbearing.[[11]] The emperor apparently attempted to obtain as much money as he could from his subjects and sold government posts to the highest bidder. His favorites were allowed to oppress his subjects. Sources also condemn his homosexuality[[12]] He did have some military success and, in addition to other military threats, he had to deal with Donatist-related bandits in North Africa.

Like his father Constantine I and his brother Constantius II, Constans had a deep interest in Christianity. Together with Constantius II he issued (or perhaps re-issued) a ban against pagan sacrifice in 341.[[13]] The next year, they cautioned against the destruction of pagan temples.[[14]] Unlike his brother Constantius II, who supported the Arian faction, he stood shoulder to shoulder with Athanasius and other members of the Orthodox clique. In fact, it is due to his request that the Council of Serdica was called to deal with the ecclesiastical squabble between Athanasius of Alexandria and Paul of Constantinople on one side and the Arian faction on the other.[[15]]

When Magnentius was declared emperor in Gaul during January 350, Constans realized his reign was at an end. When he learned of the revolt, he fled toward Helena, a town in the Pyrenees, where he was put to death by Gaeso and a band of Magnentius' assassins, who dragged their victim from a temple in which he had sought refuge.[[16]]

Constans' birthdate is calculated by counting backwards from his age at the time of his death. Sources indicate that he died at either 27 or 30 (DiMaio, Zonaras, 281, n.16; Jones, Martindale, and Morris, PLRE, 1.220). This would place his birth at some date between 320 and 323, although Barnes, relying on numismatic evidence, argues for the year 323 (New Empire, 45).

[[3]]For a discussion of the dating of Constans' Caesarship and a list of the sources that treat it, see PLRE, 1.220.

[[5]]For a listing of sources which discuss the apportionment of the empire among the sons of Constantine and their interpretation, see Michael DiMaio, "Smoke in the Wind: Zonaras' Use of Philostorgius, Zosimus, John of Antioch, and John of Rhodes in his Narrative on the Neo-Flavian Emperors," Byzantion, 58 (1988): 336ff, and Dietmar Kienast, Römische Kaisertabelle (Darmstadt, 1990), 307.

[[7]]For a listing of Constans' military campaigns, their chronology, and the sources that treat them, see Barnes, Athanasius and Constantius: Theology and Politics in the Constantinian Empire, (Cambridge, 1993), 224-225

[[12]]See further Eutropius, 10.9. This condemnation of homosexuality challenges recent scholarly views of its acceptance in late antiquity. For further discusssion of this topic, see William A. Percy's review of Mark D. Jordan, The Invention of Sodomy in Christian Theology (Chicago, 1997) in The American Historical Review 103 (1998): 496-497. For a discussion of Constans' homosexual tendencies, see further DiMaio, Zonaras, 279ff.

Copyright (C) 1998, Michael DiMaio, Jr. and Robert Frakes. This file may be copied on the condition that the entire contents,including the header and this copyright notice, remain intact.