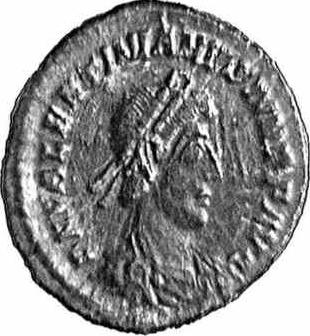 Valentinian II (full name Flavius Valentinianus) was born in 371. He was the son of the emperor Valentinian I. His mother was Valentinian Is second wife Justina, who had formerly been married to the usurper Magnentius. In addition to Valentinian II, the elder Valentinian and Justina had three daughters: Justa, Galla, and Grata.[[1]] When Valentinian I died at Bregetio on November 17, 375, the younger Valentinian was proclaimed Augustus by the army on November 22.[[2]] This was problematic because his half-brother, Gratian, was already the legitimate Augustus in the west, having been so designated in 367 by Valentinian I himself.[[3]] But the army and its leaders were apparently unwilling to accept Gratian, who was not as effective military leader as his father Valentinian had been. Thus, to prevent a possible split of the army, which might have proven disastrous since Valentinian had died in the middle of a campaign against the Quadi and the Sarmatians, the general Merobaudes summoned the four-year-old Valentinian II, who was only 100 miles away with his mother, and proclaimed him Augustus.[[4]] There are conflicting reports as to how Gratian, who was at Trier at this time, reacted. Socrates and Sozomen state that Gratian was upset and only reluctantly recognized the armys choice, while Ammianus reports that Gratian surprised everyone by graciously accepting his half-brother and even seeing to his education.[[5]]

Valentinian II was consul in 376 and again in 378 with Valens.[[6]] In 387 he was named consul with Eutropius.[[7]] His fourth and final consulate was in 390 with Flavius Neoterius.[[8]] Since he was a minor, Valentinian was strongly influenced by his imperial court, but even more so by his mother.[[9]] In addition, Theodosius used Valentinians youth as justification to act as the senior Augustus of the empire. This is clearly seen in the numismatic evidence, where Theodosius consistently used the unbroken legend VALENTINIANUS on coinage issued in Valentinian IIs name. This type of legend was generally used to mark the junior partner in the imperial relationship.[[10]]

Valentinians power was further undermined in 383 Magnus Maximus, who was possibly the comes Britanniae, crossed into Gaul, killed Gratian, and put forth a claim to a share of the imperial title.[[11]] The court of Valentinian II was most alarmed at Maximus usurpation, and Ambrose, bishop of Milan, was sent as an ambassador. At this meeting, Maximus demanded Valentinian IIs surrender, but Ambrose refused. This embassy did buy time for Valentinians magister militum, Bauto, to fortify the Alpine passes against Maximus.[[12]] Probably at the urging of Theodosius, the court of Valentinian entered into a treaty with Maximus in 384, whereby Maximus was recognized as a legitimate Augustus in return for leaving the young Valentinian in power. Maximus was to control Gaul, Britain, Spain, and Africa, with Illyricum going over to Theodosius, and Valentinian retaining Italy. This arrangement stayed in force until broken by Maximus when he invaded Italy in 387.[[13]]

When Maximus invaded, Valentinian and his mother were forced to flee to Thessalonica and seek the help of Theodosius. Theodosius agreed only after he was offered the hand of Galla in marriage. He marched west in 388, defeated Maximus and restored Valentinian to power. After the defeat of Maximus, Theodosius was clearly in charge of the empire, and he stayed in the west until 391. During this time he filled many key administrative and military posts with his supporters, and when he returned to the east, he left Arbogastes, Valentinians magister militum, to watch over Valentinian II and his court, now in Vienna in Gaul.[[14]] The sources are unanimous that Arbogastes was in complete control of Valentinian II, who frequently complained about the state of affairs to Theodosius.[[15]] These protestations fell on deaf ears, and Valentinian II died on 15 May 392, either a victim of suicide or killed by Arbogastes, though more than likely it was suicide.[[16]]

One of the more notable aspects of Valentinian IIs reign was that, like his predecessor Gratian, Valentinian was at the center of the religious controversies of the time. Valentinian was the focal point in a battle between his mother, who was an Arian, and Ambrose. Justina persuaded Valentinian to sanctify the Arian bishop Auxentius takeover of one of Ambroses churches. Ambrose responded by barricading himself in the church with his congregation on Easter of 386, and Valentinian was forced to rescind his order.[[17]] Valentinians favoritism towards Arianism was also used against him by both Magnus Maximus and Theodosius. Theodosius supposedly wrote the young Valentinian a letter saying he got what he deserved from Maximus because he had deserted the true faith.[[18]] Similarly, Maximus used this same theme in his propaganda against Valentinian. In a scathing letter, Maximus claimed that he was more of a legitimate ruler than Valentinian II because the latter had deserted the true faith of his father.[[19]] In addition to being involved in the conflict between Arians and supporters of Nicean orthodoxy, Valentinian continued the imperial policy of favoring Christianity over the interests of the pagan senatorial aristocracy. In 384, he rejected an appeal from the praefectus urbis Symmachus to restore the Altar of Victory, which had been removed from the Forum by Gratian in 382.[[20]] These setbacks for the Arians and the Senate indicate the growing affiliation of Nicean orthodoxy with the imperial office.

Overall, the reign of Valentinian II was unremarkable. He was the victim of late fourth century Roman politics. Valentinians reign shows the marked weakness of the west as compared to the east. From this point forward, the center of power lay at Constantinople. There would continue to be rulers in the west, but they would be weak and ineffectual, until the western provinces fell away from the control of the imperial court at Constantinople in the fifth century.

Copyright (C) 1998, Walter E. Roberts. This file may be copied on the condition that the entire contents,including the header and this copyright notice, remain intact.