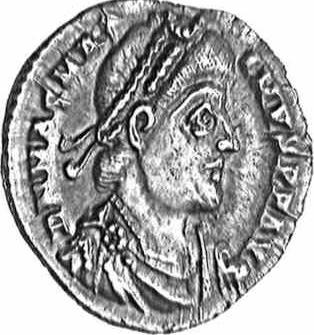 Magnus Maximus (383-88) was a Spaniard. His early career was influenced by his relationship with Theodosius the Elder, magister militum per Gallias from 369. Maximus was possibly related to Theodosius, but more likely a client. When Theodosius was sent to stamp out the "barbarian conspiracy" in Britain from 367-69 Maximus was probably a non-commissioned officer in either the Heruli or Batavi legions. He also likely served with Theodosius in Raetia from 370-72 where Theodosius had been sent to fight the incursions of the Alamannic chieftain Macrianus.

Maximus definitely served with Theodosius in Africa in 373. Theodosius had been sent by Valentinian I to put down an uprising of the Moorish rebel Firmus, and to investigate the criminal activities of Romanus, the commanding general in Africa. Maximus was assigned to work with Gildo, a brother of Firmus who was still loyal to the Romans. Their job was to arrest Vincentius, the vicarius of Africa who was suspected of being an accomplice of Romanus. This duty suggests that Maximus was a deputatus. These were officers hand-picked by the emperor to assist the various Roman generals in tasks such as arresting subversives. Maximus next known assignment was on the Danube in 376, where he was dux Moesiae secundae, and was assisting Lupicinus, the magister militum per Thracias, in settling Goths on Roman territory. Maximus may have been present at Adrianople in 378, but this is uncertain.

Around 380 he was promoted to comes Britanniae, which is a general of the field army in Britain. In 381 he defeated an incursion of the Picts and Scots. In 383, he was acclaimed emperor by his troops and crossed into Gaul to confront the emperor Gratian. His reasons for revolting are not entirely clear. Most contemporaries say he was an unwilling emperor, but more than likely Maximus had hoped to win a position as Augustus due to his close relationship with Theodosius the Elder. Theodosius' son had become the eastern Augustus Theodosius I in 379. In January of 383, however, Theodosius I named his infant son Arcadius as his successor, effectively destroying any hopes that Maximus may have had of assuming a share of the imperial power legally.

Once he had crossed to Gaul, he met the western emperor Gratian outside of Paris. They skirmished for five days until Gratian was betrayed, first by his Moorish cavalry, and later by the rest of his troops. Gratian fled towards Italy with his personal bodyguard of Alans. Maximus dispatched his magister equitum Andragathius to pursue Gratian. Andragathius caught and slew Gratian at Lyons on 25 August 383. These events illustrate Maximus' use of barbarians in his rise to power. He probably won the support of Gratian's Moorish troops through his earlier association with Gildo. Also Gratian had been fighting the Alamanni in Gaul just prior to Maximus' crossing. This is a possible indication that the Alamanni were Maximus' clients. He may have met them in Britain, where Valentinian I had sent Fraomar, an Alamannic chieftain, with his people to bolster the Roman defenses in Britain after 369. In addition, Maximus used Gratian's favoritism towards his Alan bodyguard to incite the troops in Britain to mutiny. Finally, Maximus' magister equitum was a Goth.

After defeating Gratian, Maximus set up his court at Trier and sent ambassadors to Theodosius I and Valentinian II. It seems, however, that he had intentions of continuing on to Italy. He amassed a force composed mainly of his Alamanni clients, but was thwarted by the quick action of Valentinian II's general Bauto who came north and fought a delaying action until the bulk of his forces could fortify the Alpine passes. In addition, Theodosius I came west with an army. As a result of these two events, an accord was reached between Maximus, Theodosius I, and Valentinian II in 384, whereby Maximus was recognized as an Augustus in return for leaving Valentinian II in power. Sometime after this agreement, but still in 384, Maximus named his infant son Victor as Augustus and no longer recognized Valentinian II.

Maximus' regime seemed to function smoothly. He ruled in Britain, Gaul, Spain, and Africa. He issued coinage, promulgated laws, and had an imperial bureaucracy. Maximus was a staunch Nicene Christian. He executed the Spanish heretic Priscillian sometime between 384-86, arousing the ire of Pope Siricius and other prominent members of the church. This was ostensibly over doctrinal issues, but was really a question of authority. In addition, he reorganized the provinces in Gaul, most notably creating Lugdunensis III and Lugdunensis Senonia, as well as giving his name to Maxima Sequania. His associate Gildo ruled Africa.

In 387, Maximus decided to invade Italy and displace Valentinian II once and for all. Valentinian fled to Theodosius in the east and requested help. Theodosius mustered an army and marched west. After several battles in Illyricum at Emona, Siscia, and Poetovio, Maximus was captured and executed at Aquileia on 28 August 388. Maximus was important for several reasons. The trend of generals holding de facto power in the west had begun. His relations with the church began the long battle over secular rulers having power over the church. In addition his use of barbarians was another foreshadowing of the conditions prevalent in the west during the fifth century. Finally, Maximus was the last really powerful emperor in the west; his defeat all but insured that the center of the Roman empire was to become Constantinople.

Birley, Anthony R. "Magnus Maximus and the Persecution of Heresy." Bulletin of the John Rylands University Library of Manchester 66 (Autumn 1983): 13-43.

Copyright (C) 1997, Walter Roberts. This file may be copied on the condition that the entire contents, including the header and this copyright notice, remain intact.