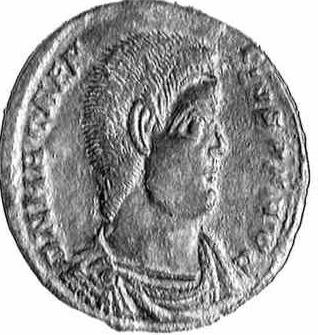 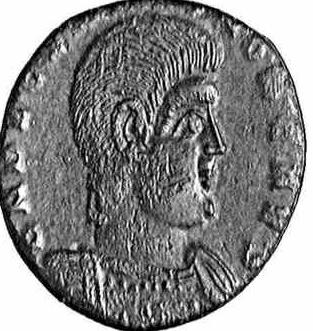 Flavius Magnus Magnentius, though of German stock, was born at Samarobriva of a British father and a Frankish mother. He was married to Justina, who in later years married the Emperor Valentinian I after the death of her first husband. Magnentius' military career included service in the Protectores and an appointment as the Comes of two legions, the Joviani and the Herculiani. At some unspecified date he was saved from murder by some soldiers due to the intervention of Constans during a military rebellion. On the night of 18 January 350 Magnentius was declared emperor at Augustodunum at a banquet. He had decided to revolt at this time because he heard about military setbacks Constantius was suffering in the east. When Constans learned of the revolt, he fled toward Helena, a town in the Pyrenees, where he was put to death by Gaeso and a band of Magnentius' assassins, who dragged their victim from a temple in which he sought refuge. He died by the end of February 350.[[1]]

Once Magnentius put Constans to death, he consolidated his hold on the realm of the late emperor. Soon Italy was in his power, and shortly controled Gaul, Africa, and Spain by the second half of February 350. The usurper killed some of those nobles whom Constans had placed in governmental positions. Late in the winter of 350, at Antioch, Constantius received the report of his brother's death and was uncertain whether to face the Persians or advance against Magnentius.[[2]] Fearing Magnentius' revolt, Constantius' sister Constantina persuaded Vetranio to assume the title of Caesar on 1 March 350. Because negotiations between Constantius and the new Caesar were deadlocked, the latter made an alliance with Magnentius; both men attempted to force the emperor to accept them as co-rulers, an action which failed. On 25 December Constantius forced Vetranio into retirement.[[3]]

Probably in the winter of 350/1, Magnentius acclaimed Magnus Decentius, perhaps the usurper's brother, Caesar to protect Gaul and the Rhine line. In order to face Magnentius,Constantius proclaimed Gallus his Caesar on 15 March 351 to handle problems in the east. Magnentius made preparations for the war with Constantius by stripping the borders of Gaul of their defenses and sought aid from the Germans. Although Magnentius was able to successfully ambush the emperor's forces near Adrana that spring, it was not until September 351 that emperor and the usurper fought a decisive battle at Mursa; after suffering major losses, Magnentius fled the field and retreated to northern Italy to regroup his forces.[[4]] Some inconclusive diplomatic activity occured. When Constantius' forces seized some of the usurper's territory in Italy, he fled west to Gaul to hide among his people. To divert some of the emperor's attention from him, Magnentius sent one of his servants to Antioch to kill Gallus, an action which came to nothing.

Until 3 July 353 Constantius remained in Mediolanum (Milan) and then moved to Gaul during the late summer of that year. Near the Cottian Alps, in the area of Mons Seleuci, he defeated Magnentius' forces; the usurper fled with his few remaining troops to Lugdunum. His soldiers discovered that they were supporting a lost cause and decided to surrender Magnentius to the emperor. When Magnentius realized that there was no escape, he murdered, or at least attempted to murder, his own mother and all the relatives who were with him . On 10 or 11 August 353 Magnentius committed suicide.[[5]] In less then a week, on 18 August, Decentius, his Caesar, on his way to aid him, hanged himself at Senonae when he received the news of Magnentius' death.