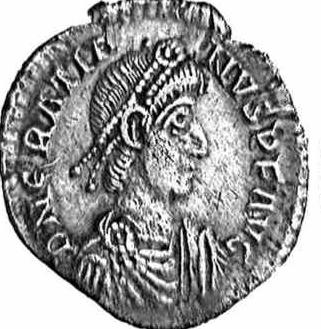 Gratian (full name Flavius Gratianus) was born April 18, 359 at Sirmium.[[1]] He was the son of the emperor Valentinian I and Marina Severa. His grandfather was the comes Gratian.[[2]] Little is known of his early childhood, but he was awarded the consulate of 366 along with Flavius Dagalaifus.[[3]] In 367, he accompanied his father on campaign against the Alamanni in Gaul, where Valentinian was stricken with a mysterious illness. When it appeared that the emperor would die, a scramble immediately ensued to pick his successor.[[4]] The imperial court championed the magister memoriae Rusticus Julianus, while the army supported the magister equitum Severus.[[5]] Valentinian, however, recovered and designated Gratian as his successor by proclaiming him co-Augustus, a procedure which was highly unusual.[[6]]

By performing this act, it seems that Valentinian hoped to prevent a future recurrence of the infighting between the imperial court and the senior officer corps over his successor, thus ensuring a smooth transfer of power upon his death, and keeping the imperial office within his family. There was some concern about the choice of Gratian, however, both among the army and by Valentinian himself. Unlike his father and uncle Valens, the young Gratian (he was only eight at the time) did not show any proclivity for being a skilled soldier, being more interested in ôhumanitate et studiis disciplinarumö than the art of war.[[7]] According to the historian Ammianus Marcellinus, Valentinian gave two speeches to assuage these fears. The first was delivered to the army. He agreed that Gratian was not yet able to ôendure the dust of Mars,ö but stated Gratianĺs ability to rule would be based on his sense of justice and the nobility of his character. Furthermore, he was sure that in time Gratian would grow into the role of military commander.[[8]] After this speech, Valentinian then publicly admonished his son to ôponder the urgent mattersö before him and act accordingly.[[9]]

Soon afterwards, Valentinian turned his sonĺs education over to Ausonius, the leading rhetorician of the time.[[10]] Valentinian brought Gratian with him during the campaigning season of 368, but after it became clear that Gratian was not up to the rigors of military life, Valentinian kept him behind the front lines.[[11]] Ausonius was apparently with Gratian during this time, as their experiences were the basis for his poem Bissula and two epigrams about the Danube River.[[12]] Gratian was named consul for the second time in 371 along with Petronius Probus, and again in 374, when his partner was Flavius Equitius.[[13]] This third consulate apparently carried over to 375, as military operations in Pannonia precluded any nomination of consuls for that year.[[14]] In 374 he married the daughter of the late emperor Constantius II, Constantia, who was very nearly captured by the Quadi in Pannonia while on her way to marry Gratian.[[15]] After her death in 383 he married Laeta, a woman otherwise unmentioned by the sources.[[16]]

In November 375 Valentinian died at Brigetio, leaving Gratian as senior Augustus in the west. Valentinianĺs wish for a smooth succession, however, was not realized. Before going to Illyricum to confront the Quadi and Sarmatians who were raiding Pannonia, Valentinian had arranged for Gratian to stay behind at Trier.[[17]] Merobaudes, one of Valentinianĺs leading generals (probably magister peditum), arranged to have Valentinianĺs youngest son, Valentinian II, proclaimed emperor, ostensibly to quell a threatened rebellion by the army, who supposedly wanted to install their own unnamed candidate. Ammianus gives the excuse that Valentinian II was closer to Brigetio than was Gratian.[[18]]

The reality may have been that Valentinian Iĺs fear was realized: Gratian, at about 16 years of age, was no warrior, and was thus not an acceptable imperial candidate to the soldiers. In contrast, the young Valentianian, being only four years of age at the time of his fatherĺs death, could be vested with the imperial title, allowing the generals a continued free rein. According to Socrates, Gratian was upset that he was not consulted, but he acquiesced to the armyĺs demands.[[19]] Ammianus, on the other hand, stated that many feared Gratian would be angry, but he surprised everyone by accepting Valentinian IIĺs elevation in a graceful manner, even seeing to his half-brotherĺs education.[[20]] Gratian controlled Gaul, Britain, and Spain, while the court of Valentinian II controlled Illyricum, Africa, and Italy.[[21]]

The incessant raids by the Alamanni appear to have ceased for the first few years of Gratianĺs reign as senior Augustus in the west, possibly due to Valentinian Iĺs earlier campaigns. In 376, the emperor Valens requested Gratianĺs help in defeating the Goths, who were in revolt in Thrace. Gratian sent the dux Frigeridus with some legions from Pannonia and his comes domesticorum Richomeres with some Gallic legions, but Merobaudes disobeyed and left some legions to guard the borders against the Alamanni, should they decide to attack in the absence of troops.[[22]] This last was yet another indication that Gratian was not held in high esteem by his generals. Furthermore, in 381 he moved his capital from Trier to Milan, and according to Ammianus was more concerned with participating in Commodian displays of personal prowess in the arena than with overseeing military affairs.[[23]]

The situation in the east, however, grew so serious that it demanded Gratianĺs presence. He left for the east in late 377 but was delayed by a renewed Alamannic invasion in February of 378, precipitated when a barbarian from his court leaked word of the pending withdrawal of Roman troops from Gaul. Ammianus credits Merobaudes' prior decision to leave troops behind with preventing a disaster, and Gratianĺs army won a huge victory at Argentia, killing 30,000 Alamanni.[[24]] With the western provinces temporarily secured, he set out for the east again, but before he could arrive, Valens made the decision to attack the Goths at Adrianople, not wanting to share a possible victory with Gratian. This battle, which occurred on August 9, 378, was a disaster, with Valens and most of the eastern army killed.[[25]]

Gratian, not being the military leader that his uncle or father had been, found himself in dire straits as the Goths ravaged Thrace unopposed. In response to the crisis, Gratian recalled the younger Theodosius from Spain to take command of the eastern armies. After Theodosius had some initial successes, Gratian proclaimed him as Augustus on January 19, 379 and returned west. There is the very real possibility that Theodosiusĺ recall and promotion was actually the work of influential generals such as Saturninus, Victor, and Richomeres.[[26]]

Due to the influence of Ausonius, members of the Gallic aristocracy dominated Gratianĺs court.[[27]] Gratian was so enamored of Ausonius and his friends that he promulgated a law that established a system for installing professional rhetoricians and grammarians as teachers in the major cities of the diocese of Gaul.[[28]] The predominant themes of the remaining years of Gratianĺs reign, however, was the growing conflict between the emperor and provincial bishops, and between emperor and the pagan senatorial aristocracy. The first of these conflicts occured during the early 370ĺs when Priscillian, a Spanish noble, began to preach an ascetical form of Christianity in southern Gaul. He gained a sizable following, including several influential bishops. Hyginus, the bishop of Cordoba, and the priest Ithacius felt their authority threatened by this new sect and attempted to have Priscillian and his followers condemned as heretics. This conflict carried all the way to the imperial court, where Gratian sided with Ithacius and his followers. The bishops, however, bypassed Gratian and bribed Gratianĺs magister officiorum Macedonius to issue a rescript cancelling the emperorĺs previous order. The issue of Priscillianĺs place in the Church would not be ultimately settled, however, until Priscillian and several of his followers were executed by Magnus Maximus sometime between 384 and 386.[[29]] Gratianĺs support of Nicaean orthodoxy may have also contributed to strained relations with Valens, who was an Arian.[[30]] In 379, Gratian recalled all of the bishops who had been expelled in the east by Valens.[[31]]

Gratianĺs orthodoxy can also be seen in his dealings with the senatorial aristocracy in Rome. In 382, at the urging of Ambrose, he removed the Altar of Victory from the Forum and withdrew the state subsidies that funded many pagan activities. This was a crucial blow to one of the last major groups which supported Romeĺs pagan heritage. When the Senate protested, Gratian rejected the honorary title of pontifex maximus and the ceremonial robes that went with this office.[[32]] The historian Zosimus, a pagan himself, reported that this last incident prompted a senator to prophesy that there would be a new pontifex maximus (i.e. Magnus Maximus) soon enough.[[33]]

Whether or not this story was true, Gratianĺs career was shortly ended by the usurper Magnus Maximus. In early 383 Gratian went north to fight another incursion of the Alamanni, which may have been instigated by Maximus. While Gratian was worn down by this battle, Maximus was acclaimed by his troops in Britain, where he was comes Britanniae, and crossed into Gaul to challenge Gratian.[[34]] After a short period of skirmishing, Gratianĺs Moorish cavalry, followed by most of his other troops, went over to Maximus. He fled towards the Alps, but was pursued and killed at Lyons by Andragathius, Maximusĺ magister equitum.[[35]] The date of his death was August 25, 383.[[36]]

Gratianĺs reign was notable for several tendencies, most of which highlight continuing trends in the history of the later Roman empire. First, there was the continuing equation of Christianity with the office of emperor, which was exemplified by Gratianĺs rejection of the title and robes of the pontifex maximus. Second, there was the continuing influence of barbarians becoming assimilated within the empire. Gratian had barbarian supporters as members of his court and army. His armor-bearer was an Alaman, and one of his comes domesticorum was the Frankish king Mallobaudes.[[37]] It was also rumored that he angered the regular legions by bringing in a group of Alans as his personal bodyguard and giving them special preferences.[[38]] Finally, following the example of Valens, he settled some barbarian peoples throughout Moesia and Pannonia.[[39]] The trend of entrusting barbarians with key positions of power and settling them within the empire would only continue to grow.[[40]] Finally, the events surrounding his acclamation and death show the power of the army in selecting and maintaining emperors during the late empire. Perhaps in another era Gratian would have been one of the more noteworthy emperors, but, as Ammianus noted, Gratianĺs talents lay in the opposite direction of what was needed for the empire at this time.[[41]]

Burns, Thomas S. Barbarians within the Gates of Rome: A Study of Roman Military Policy and the Barbarians, ca. 375-425. Bloomington, 1994.

Haarhoff, T.J. Schools of Gaul: A Study of Pagan and Christian Education in the Last Century of the Western Empire. Johannesburg, 1958.

Copyright (C) 1998, Walter E. Roberts. This file may be copied on the condition that the entire contents,including the header and this copyright notice, remain intact.