Leontia (Wife of the Emperor Phocas) 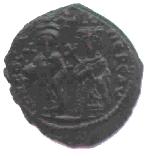 Leontia was the wife of the emperor Phocas, who was crowned by the army on 23 November 602, after the flight from the capital of the emperor Maurice and his wife Constantina. According to the Chronicon Paschale Phocas entered the city on 25 November, and after chariot races and donatives to the soldiers, he had Leontia escorted royally into the city and crowned Augusta. Theophanes dates this coronation to 27 November, on the fifth day after Phocas's proclamation.[[1]] The account of Theophylact Simacatta gives us valuable information about the reception of a new empress at this period, and the way in which Leontia's arrival sparked further conflict between the circus factions of the Blues and Greens:

"The tyrant (Phocas) also had a wife whose name was Leontia; he placed a royal crown on her. Since it is customary for emperors to proclaim their consorts with processions as well, the tyrant openly honoured the custom and decided to lead the queen Leontia in triumph. On this day then, there was a conflict between the factions about their station, since they contested the arrangement of places: for the Greens wanted to take up station in the Ampelion, as it is called (this is a forecourt of the emperor's dwelling), and to serenade the queen with the customary applause, but the Blue faction objected, for they regarded this as contrary to custom and alien. Accordingly, since very great commotion arose, the tyrant sent in Alexander to quell the strife of the disputants".[[2]]

It was this factional disturbance, in which the Blues reminded Phocas that Maurice was still alive, which persuaded Phocas that the former emperor had to be killed, and the execution took place the same day.

Phocas and Leontia had one daughter, Domentzia, who was married, probably in 605, to the patrician general Priscus. The groom at least was more than middle-aged, being approximately 60 years of age at the time.[[3]] This is our last reference to Leontia in the sources, for we are told that the marriage took place with great pomp in the Marina palace, a departure from tradition, and that during the races following the wedding the factions placed statues both of the imperial couple, Phocas and Leontia, and of the newly-weds in the Hippodrome, decked with bay-leaves. The fact that this honour was also paid to the bride and groom implied that Priscus was Phocas's heir or colleague and Phocas, in a temper, ordered the statues of his daughter and new son-in-law to be destroyed. Phocas's rages and brutality are clearly exaggerated by historians, though he may not have been the easiest of men to live with: certainly, he was said to have had an official mistress, Callinice, the daughter of a high-ranking official.[[4]]

Leontia's imperial status was emphasised on the coinage. She appears on much of the copper coinage of the East, on folleis and half-folleis from Constantinople (unlike her predecessors Ino and Constantina), Thessalonica, Nicomedia, Cyzicus, and Antioch, shown standing beside Phocas, crowned and nimbate, holding a cruciform sceptre,[[5]] even though Leontia had not produced an heir to the throne. The date of her death is not known, but she was presumably one of the family members killed after Phocas's overthrow on 5 October 610.

Whitby, M., The Emperor Maurice and his Historian. Oxford, 1988.

Copyright (C) 1999, Lynda Garland. This file may be copied on the condition that the entire contents, including the header and this copyright notice, remain intact.