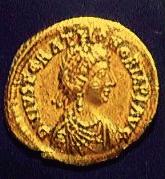 Justa Grata Honoria, another strong-willed fifth-century woman, was born in 416 or 417, the daughter of the future emperor Constantius III (421) and Galla Placidia. She was the elder sister of the emperor Valentinian III (425-455), and she held the title of Augusta. At the orders of her brother, she was devoted to virginity, a situation she did not find to her liking. Circa 449 she was apprehended in a love affair with the overseer of her estates; both supposedly were engaged in a plot to seize power for Honoria. As a result, her lover was executed and she was exiled to Constantinople. She then appealed for help to Attila the Hun, at which the eastern emperor Theodosius II, who already had enough problems with the Huns, immediately dispatched her back to Italy -- with the recommendation that Valentinian turn her over to Attila. Valentinian, meanwhile, was enraged, and only spared her life because of the earnest entreaties of their mother. She then was compelled to marry a reliable senator named Flavius Bassus Herculanus and subsequently she was kept under close guard. Attila, meanwhile, chose to interpret Honoria's missive as a marriage proposal, and demanded half of the western Roman Empire as her dowry. Attila's ultimatum was refused, and he responded by invading the western empire in 451 and 452. Honoria's ultimate fate is unknown; she may have been dead by 455.

Copyright (C) 1996, Ralph W. Mathisen. This file may be copied on the condition that the entire contents,including the header and this copyright notice, remain intact.