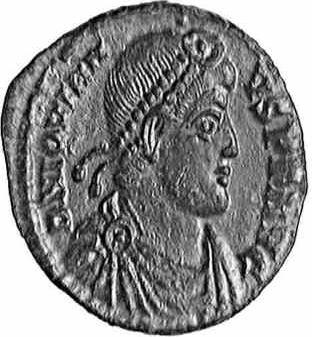 Flavius Jovianus (PLRE I, s.v. "Fl. Iovianus 3") was born in 331 at Singidunum, modern Belgrade. His distinguished father, Varronianus (PLRE I, s.v."Varronianus 1"), had been a tribune of the legion Ioviani and a comes domesticorum, perhaps under Constantius II, who had retired to private life shortly before Jovian's elevation to the purple. Jovian married a daughter of Lucillianus (PLRE I,s.v. "Lucillianus 3" ), perhaps named Charito (PLRE I), and by her produced at least two children, one whose name is unknown, the other, named for Varronianus, who was to share the consulship of 364 with his father. Like Jovian's father, Varronianus, Lucillianus, Jovian's father-in law, had a distinguished career. Constantius II had given him a command against the Persians in 350, at which time the emperor himself had moved west to check Magnentius; ca. 354 he was a comes domesticorum of Gallus; in 358-359 he served with Procopius as an envoy to the court of Sapor; and in 361 Julian, marching east after his proclamation in Paris, captured him at Sirmium, where, perhaps with the rank comes et magister equitum, he was in command of troops loyal to Constantius. This seems to have precipitated his retirement to private life. He continued to reside in Sirmium until appointed magister equitum et peditum by Jovian in 363. Perhaps Jovian also planned some honor for his father Varronianus, but the latter died shortly after hearing that his son had become Augustus.

Jovian himself was a protector domesticus under Constantius and Julian and, under Julian, primicerius domesticorum. Various Christian sources maintain that Jovian's Christianity led to his deposition by Julian, though most modern scholars dismiss this as ex post facto Christian apologetic.[[1]] Although Jovian's career was not particularly distinguished, his father's achievements and his connections to Lucillianus might lend credence to the assertion of Ammianus (25.10.16) that Varronianus dreamed of his son's ascension and of his own consulship. The Epitome de Caesaribus (44.2) simply records that a dream directed Varronianus, whose earlier progeny had died in childhood, to name his expected son Jovian, which, because it was also a traditional title of an Augustus, could post eventum be taken as a presage of Jovian's elevation. The consulship of Jovian's son Varronianus was, of course, explained as the fulfillment of the dream of the elder Varronianus.

Jovian, recalled to the ranks if he had ever been dismissed, marched with Julian against Sapor in 363 and on 27 June, the day after that emperor's death, was acclaimed Augustus. Ammianus sets the choice of Jovian immediately after Julian had died but before his demise had been announced to the troops and attributes the choice of Jovian over other, allegedly more suitable candidates, to the vocal support of a few hot-headed soldiers. Zosimus (3.30.1), following Eunapius' History as usual, offers a slightly different version, attributing the selection of Jovian to a "common vote." Still others make Jovian the consensus choice of the soldiery, presented to the commanders almost as a fait accompli. There is a rich tradition extending to the ninth century Arab annalist al-Tabari recounting Jovian's refusal of the purple because, as a Christian, he would not rule over pagans, a declaration followed by the profession of the Roman troops that they too were Christian. Zonaras (13.13.4) alleges that Julian had discerned a presage of the rule of Jovian when the later accidentally stepped on Julian's purple cloak as the pair descended a slope during the Persian campaign, and John Lydus (De mensibus 4.118) alone preserves a version which alleges that Julian, on his deathbed, actually nominated Jovian.[[2]]

Ammianus and Zosimus, among others, detail the difficult straits of the Roman army during its withdrawal from Persian territory, Ammianus from the perspective of a proud soldier confident even in defeat of the superiority of Roman arms, Zosimus, in a much shorter and confused version, concentrating on the predicament of Jovian's troops and on the dire effects to the empire of the peace terms agreed to with Sapor. These terms entailed the cessation to Persia of Roman territory beyond the Tigris -- the cities of Singara and Nisibis, however, to be surrendered on the condition of the safe passage of their inhabitants -- and the guarantee of the neutrality of Rome's ally Arsaces, King of Armenia, in the event of future hostilities between Roman and Persia. Ammianus asserts that in agreeing to these terms Jovian misjudged his tactical strength and wasted an opportunity presented by negotiations with Sapor to move his forces closer to supplies at Corduena, and that Jovian acted on the advise of flatterers to preserve the fighting strength of his forces in the event of an attempt by Julian's relative Procopius to seize the throne. Others present the treaty terms as unavoidable given the Roman predicament.

Jovian appears to have treaded cautiously with regard to religious matters during the early months of his reign. Eunapius (VS 478) says that Jovian continued to honor Maximus and Priscus, the Neoplatonist advisors of Julian, and, upon reaching Tarsus, Jovian performed funeral rites for Julian (Socrates 3.26). At Antioch, however, where Jovian spent the end of September, the month of October, and early November, John of Antioch (fr. 181, Müller FHG IV, 606-607 = Eunapius fr. 29.2, Blockley) charges that the emperor, urged on by his wife, burned a temple constructed by Hadrian that Julian had made into a library. Whether this possibly baseless tale was meant as a pagan insult or a Christian compliment is difficult to tell. Themistius (Or. 5) offers to Jovian a plea for religious toleration along with what seems to be a reference to an actual proclamation of the same by an edict of Jovian. Regardless of the existence of an actual edict, sacrifice continued (Libanius Or. 30.8). If Ammianus can be trusted, the reactions of the field army to Julian's death, the mutiny of the garrison of Milan occasioned by its announcement by Lucillianus, the father-in-law of Jovian, and Lucillianus' subsequent murder by troops at Rhiems indicate that caution was justified. Likewise, for John of Antioch's account (fr. 181, as above) of the highly vocal hostility of the Antiochenes to Jovian.

The few official inscriptions from Jovian's reign employ traditional epithets (e.g., ILS 757, a milestone styling him "Victor, and Triumphator, Eternal Augustus." ) Certainly the typical legends of Jovian's coins --VICTORIA ROMANORUM, GAUDIUM ROMANORUM, GLORIA ROMANORUM, SECURITAS REI PUBLICAE, strive to control damage to the imperial image, tarnished by the treaty with Persian, rather than the regeneration of a Christian empire. And though images of Isis and Anubis continue to appear on some issues at Rome, representations of a cross on a banner from the mint at Heraclea, the Chi Rho monogram from Thessalonica and Sirmium, and the labarum from Arles proclaim Jovian's religious allegiance (RIC VIII, pl. 13, no. 510; pl. 21, no. 107; pl. 20, no. 229, and 18, no. 112; and pl. 8, no. 328, respectively). Legislation for 363 is nondescript: Cod. Theod. 7.4.9, of September 27, 363 from Edessa, on foraging by troops; 10.19.2, (ascribed to Julian), of October 22, 363 from Antioch, on quarrying marble; 11.20.1 (ascribed to Julian), of November 12, 363 from Mopsuestia, provisions for payment of the collatio lustralis; and 8.1.8 (ascribed to Julian), of November 27, 363, posted at Viminacium (modern Kostolac of the former Yugoslavia), on checks on corrupt activity of accountants; and Cod. Ius. 1.40.5 (ascribed to Valentinian and Valens), of December 28, 363 -- the date obtained by Seeck (Regesten, p. 84) through emendation of the transmitted IUN or IUL to IAN and the place of issue, Ancyra, inferred from Jovian's known presence in Ancyra at that time --, on judicial appeal.

Nonetheless, various Christians, most notably Athanasius, took the initiative in an effort to gain Jovian's favor and support. Theodoret (Hist. Eccl. 4.3) quotes in full a letter -- the so-called Epistula ad Jovianum Imperatorem -- in which the exiled bishop of Alexandria declares his credo. An adherent of the Nicaean creed, Jovian did eventually recall various bishops of homoousian disposition and restore to their followers churches lost under earlier emperors. But in spite of such measures, unity among various Christian sects seems to have been the foremost concern of Jovian, whose ipsissima verba Socrates Scholasticus purports to give: "I abhor contentiousness, but love and honor those hurrying towards unanimity" (Hist. Eccl. 3.25).[[3 ]] The Codex Theodosianus preserves two laws concerning religious matters which some modern scholars assign to Jovian: the first (9.25.2 of February 19, 364, two days after Jovian's death) deals with penalties for the corruption of virgins and widows who have dedicated themselves to the Christian god, while the second (10.1.8) mandates the return to the crown of any lands and estates given or sold to temples by previous emperors. However, the transmitted place of issue (DAT. PRID. NON. FEB. MED[IOLANO] DIVO IOVIANO ET VARRONIANO CONSS., i.e., "Issued 4 February at Milan by the Divine Jovian and Varronianus, Consuls") together with the superscription of this law (IMPP. VAL[ENTINI]ANUS ET VALENS AA. AD CAESARIUM COM[ITEM] RERUM PRIVATARUM) present difficulties. No emperor was at Milan on February 4, 364 and by that day in 365, when Valentinian and Valens at least were in power, Florianus 1 (PLRE, s.v. "Florianus 1," 1.366-367 ) rather than Caesarius 1 (PLRE I, pp. 168-169) was comes rerum privatarum. Seeck (Regesten, p. 111) proposed a convincing solution through the emendation of MED, i.e., Milan, to MNIZA, i.e., Mnizus, located between Ancyra and Dadastana, the location of Jovian in February 364. From this emendation follows the explanation of the names of the emperors in the superscription as another example of the common practice of the compilers of the Codex Theodosianus of assigning all the laws of 364 to Valentinian and Valens. The ecclesiastical historian Theodoret also speaks of the planned restoration to churches of a corn allowance granted originally by Constantine (Hist. Eccl. 4.4). The legal persecution of pagans and the destruction of their places of worship alleged by Socrates (Hist. Eccl. 3.24) and other Christian sources very likely reflects personal, unofficial acts of revenge undertaken with the presumed approval of Jovian. This may explain a curious inscription from Corfu (IG IX.1, no. 721): "With kingly faith, my passions' helpmate, | for You, Blessed on High, this holy temple I did found, | the Hellenes precincts and altars having destroyed. | From a humble hand, Jovian [dedicates this], a gift for a king."[[4]] Finally, Cod. Theod. 13.3.6 of January 11, 364, again ascribed to Valentinian and Valens, may be Jovian's response to Julianic edicts on education or at least to the state of affairs with regard to education that had developed in various locales as a result of the pro-pagan climate under Julian.

Jovian died at the age of thirty-two on 17 February 364 at Dadastana on the boundary of Bithynia and Galatia. The cause of his death was most probably natural and is variously attributed to overeating, the consumption of poisonous mushrooms, or suffocation from fumes of charcoal or of the fresh paint on the room in which he was sleeping. Ammianus' comparison of the circumstances of Jovian's death to those of Scipio Aemilianus suggest the possibility of foul play, as does John of Antioch's reference to a poisoned rather than a poisonous mushroom (fr 181, as above), while John Chrysostom -- in a highly suspect literary context of consolatio and if he is actually referring to Jovian -- asserts outright that the emperor was murdered (Ad viduam iuniorem 4/344, ed. Migne, PG 48 [1862], p. 605). Eutropius (10.18.2) records that he was enrolled among the gods, inter Divos relatus est. Zonaras (13.13.14) says he was buried in the Church of the Holy Apostles and that his wife, Charito, was eventually laid to rest beside him.

Ancient authors agree that Jovian was of modest intellect but imposing physique and disposed to excessive eating and drinking.

Copyright (C) 1996, Thomas Banchich. This file may be copied on the condition that the entire contents, including the header and this copyright notice, remain intact.