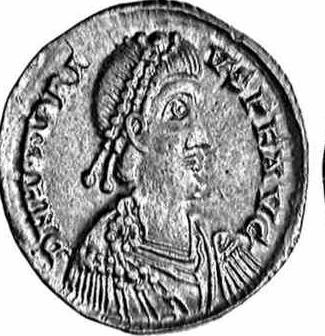 Flavius Honorius was born in the east in 384, the younger son of the emperor Theodosius I (379-395) and Aelia Flavia Flaccilla. In his youth he was named Most Noble Child (nobilissimus puer), and in 386 he held the consulate. He was summoned by his father to Rome when he was five, but in 391 he returned with him to Constantinople, where in 393 he was proclaimed emperor. In 394, he was called to Milan, and in 395, when Theodosius died, Honorius and his brother Arcadius jointly succeeded to the throne, with Arcadius ruling the east and Honorius the west. This year marked the beginning of the true de facto division of the empire into eastern and western halves, each under the rule of its own emperor even though, in theory, the empire remained a single entity. Both boys spent their reigns under the influence of powerful advisers. The first such power behind the throne in the west was the Vandal general Stilicho, both of whose daughters Honorius married -- Maria circa 398 and Thermantia in 408.

After the Visigothic invasion of Italy in 402, Honorius and the imperial court retired from Milan to the inaccessible and heavily defended city of Ravenna. Only rarely did later emperors reside for any length of time elsewhere. Meanwhile, palace intrigues resulted in Stilicho's assassination in 408, and Honorius was left to deal with Alaric and the Visigoths. The indecisive emperor, influenced first by one adviser and then by another, vacillated between resistance and conciliation. The end result was the sack of Rome in 410.

Nor were the Visigoths the only barbarian invaders of the western empire during Honorius' reign. In 405, the barbarian adventurer Radagaisus assembled a huge army in the Danubian region, invaded Italy, and ruined many Italian cities. Not until August of 406 were he and his army destroyed by Stilicho. On the last day of the same year, hordes of Burgundians, Alans, Suevi, and Vandals crossed the frozen Rhine into Gaul and slowly made their way south. In 409 all but the Burgundians crossed into Spain. In northeastern Gaul, the Franks extended their influence, and in 418 the Visigoths were granted a treaty which assigned to them much of southwestern Gaul. Gradually, therefore, more and more of the western empire was slipping from Roman hands.

Honorius' reign also was afflicted by several revolts and usurpations. In 397, the Master of Soldiers Gildo revolted in North Africa, only to be suppressed in 398. In Britain, a succession of rebellions by the discontented and isolated soldiery included those of Marcus (406-407), Gratian (407), and Constantine III (407-411). In 407, Constantine crossed to Gaul, and successfully advanced all the way to Arles. Meanwhile, in 409, the senator Priscus Attalus was proclaimed emperor, although he was deposed when Alaric and Honorius made a short-lived peace in the next year. At the same time, Constantine's general Gerontius rebelled in Spain, and in 409 elevated a certain Maximus to the purple. Honorius, for his part, sent his general Constantius to deal with the situation in Gaul in 411. The resultant falls of Constantine and Maximus, however, were followed by a revolt in northern Gaul by Jovinus, which was not suppressed until 413. The powerful general Constantius then married Honorius' sister Galla Placidia in 417, and was promoted to co-emperor with Honorius in 421, only to die of illness later in the year. Meanwhile, in 420, the "tyrant" Maximus -- perhaps the same man -- seized power in Spain, and he was not subdued until 422.

As for the feckless and timid Honorius, he generally took little part in public affairs. He was generally passive in nature, except when he was motivated to act by fear. He left military operations to his generals, but he did become involved in a controversy over the choice of a bishop of Rome in 418. He eventually died of "dropsy" -- perhaps edema of the lungs -- in 423. He left no issue, which resulted in the proclamation of Johannes, the Chief Secretary, after his death. Not until 425 did his nephew Valentinian III, the son of Galla Placidia and Constantius, restore the legitimate dynasty. Even though the unity of the western empire was shakily maintained during Honorius' reign -- only Britain was lost for good (Honorius wrote to the Britons advising them to defend themselves) -- he left a legacy of fragmentation and feeble, lackluster leadership which eventually would result in the dissolution of the western empire.

Cameron, Alan. Claudian: Poetry and Propaganda at the Court of Honorius. Oxford, 1970.

Copyright (C) December 10, 2018, Ralph W. Mathisen. This file may be copied on the condition that the entire contents,including the header and this copyright notice, remain intact.