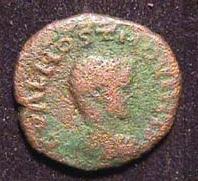 As with many third century emperors, much of the extant material on Trajan Decius and his sons is late and unreliable. If the Historia Augusta ever included biographies for the Decii, they are now lost. It is at least safe to say that Herennius Etruscus and his younger brother, Hostillian, possessed a high pedigree. Their father, the emperor Decius, was no military upstart, but hailed from a consular family based in Sirmium. [[1]]

Herennius Etruscus was born in Pannonia sometime between 220 and 230, and was thus old enough to do military service during his father's reign. [[2]] Judging by his boyish portrait on extant coins, Hostilian was considerably younger. He remained in Rome with his mother, where they presumably sought to ensure senatorial and popular loyalty to the regime. Whatever the difference in their ages was, in the year 250 Decius officially associated them in power by appointing them Caesars. [[3]] The title "Prince of the Youth" (princeps iuventutis) may have initially distinguished the elder son, but by 251 Hostilian was accorded the same titular dignity. [[4]] Nevertheless, Herennius clearly overshadowed his younger brother. By the end of his reign, Decius had elevated his son to the rank of Augustus, a distinction which Hostilian never enjoyed while his father and brother lived. [[5]]
Decius' alleged persecution of Christianity attracted little notice outside of Christian circles, nor is there any clear information connecting Herennius and Hostilian to these religious policies.

In fact, concern over the precarious Danubian frontier dominated the joint reign of Decius and his sons, to such an extent that Decius sent Herennius ahead to Illyricum very soon after he secured power. [[6]] Following serious incursions into Dacia and Moesia by the Carpi and Goths, Decius and Herennius Etruscus led an expeditionary force against the Gothic king Cniva. The barbarians were on their way to their homelands, laden with booty after their successful campaigns, as the two sides met at Abrittus (Hisarlak, near Razgrad in modern Bulgaria). Cniva was able to lure his adversaries into a swampy area, and thereafter everything fell into place for the Goths. Cniva broke his force into several tactical groups, surrounded the Roman army, and nearly destroyed it. Herennius was struck down by an arrow early in the battle. Trying to console his men, his father is said to have remarked that the loss of but one soldier mattered little to him. [[7]] Trebonianus Gallus' desperate efforts to salvage some remnant of the expedition from the slaughter were insufficient to save the lives of either Augustus.

Decius and Herennius Etruscus thus became the first Roman emperors to be killed by foreign enemies in the field of battle. The survivng men proclaimed Trebonianus Gallus emperor, even though Decius' young son Hostilian already held nominal power in Rome. [[8]] This potential conflict resolved itself later that year when a virulent outbreak of plague took the boy's life, and his mother (the Augusta Herennia Etruscilla) was deposed. [[9]]

The reign of Decius and his sons is usually perceived as one of the worst in a series of destructive turning points heralding "the crisis of the third century." Yet despite his ill fortune, the Latin sources look favorably upon Decius as a paragon of traditional principles, and this warm reception applied to his elder son as well. Eutropius claims father and son were both deified. [[10]] Syme argued that the deaths of the third century Decii would recall the ancient examples of the previous "'duo Decii' who at the interval of a generation each immolated himself to secure victory for the Republic." [[11]] Gibbon, finally, offered this obituary: "Such was the fate of Decius . . . who, together with his son, has deserved to be compared, both in life and death, with the brightest examples of ancient virtue." [[12]]

[[5]] All coins which refer to Hostilian as Augustus were issued under his father's successor. See RIC 4.3, pp. 109-110 and 143. ILS 521 (= CIL 9.4056), a dedication to the Augusta Herennia Cupressenia Etruscilla, includes the title "Mother of the Augusti" (matri Augg.). The plural 'Augusti' must have been used for convenience's sake.

[[6]] Victor, 29.2. Decius stayed behind to dedicate the monuments he had constructed.

[[8]] Gallus countered the expectations of many by appointing Hostilian Augustus, and made his own son, Volusianus, Caesar. See RIC 4.3, p. 151. According to Zosimus (1.25) Gallus adopted Hostilian, but the same author also accuses Gallus of murdering the young Augustus. On this point Zosimus' veracity is dubitable, since such political murders were among the most hackneyed themes of Roman historiography.

[[10]] Eutropius, 9.4. No supporting evidence is found for this particular assertion.

[[12]] Gibbon, vol. I, chapter 10. An apparent echo of the Historia Augusta, Divus Aurelianus 42.5-6, where the author reviews all the good and bad emperors from Augustus to Diocletian. He concludes, "So you see how few are the good princes . . . yet I must except the Decii, whose life -- and death -- is worthy to be compared to the ancients." (Vides, quaeso, quam pauci sint principes boni . . . Tametsi Decios excerpere debeam, quorum et vita et mors veteribus comparanda est).

Copyright (C) 2001, Christopher J. Fuhrmann. This file may be copied on the condition that the entire contents, including the header and this copyright notice, remain intact.