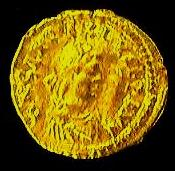 Glycerius, the seventh of the so-called shadow emperors of the western empire, is known only from scattered references primarily in jejune chronicles. A few scant insights are provided by Jordanes and Ennodius.

The year 472 saw the culmination of the civil war between the emperor Anthemius (467-472) and his barbarian Patrician and Master of Soldiers Ricimer. In April, Ricimer went so far as to create a rival emperor Olybrius, who became sole western emperor after the murder of Anthemius in July. Olybrius, however, survived only a few months, and by the beginning of November the west again lacked an emperor. By this time, moreover, Ricimer had died. John of Antioch reports what then happened: "Gundobad, Ricimer's nephew, succeeded to his position and raised Glycerius, who had held the office of Count of the Domestics, to the throne" (fr.209.1: Gordon trans., pp.122-123). The "Domestics" were an elite unit of the imperial guard, and this was not the first time that a comes domesticorum had gained the imperial office: Majorian had held the same position in 456.

Other sources provide a few additional details. Paul the Deacon noted, "The domesticus Glycerius was made emperor at Ravenna by the Patrician Gundobad with the support of the army" ("Licerius domesticus a Gundibaro patricius totius etiam voluntate exercitus apud Ravennam imperator efficitur": Historia Romana 15.5). Two slightly different dates are given for Glycerius' accession. The Fasti vindobonenses priores state, "At this time the emperor Glycerius was proclaimed at Ravenna on 5 March" ("hoc consule levatus est imp. Glicerius Ravena III non. Martias": no.611); whereas the Paschale campanum asserts, "the emperor Glycerius was proclaimed on 3 March" ("Licerius imperator levatus est V non. Mart.": s.a.473). Once again, therefore, a barbarian general had sponsored the creation of a western emperor, in this instance not long after the murder of an eastern nominee.

Glycerius apparently resided primarily in northern Italy, for nearly all of his coinage, all but one piece in gold, was issued at Milan and Ravenna. Only a few things are known, or can be inferred, about his imperial policies. It should be no surprise that he was not recognized by the eastern emperor Leo (457-474): the eastern chronicler Count Marcellinus opined that Severus had been made Caesar "more by presumption than by constitutional selection" ("plus presumptione quam electione": s.a.473), and the Gothic historian Jordanes referred to him as one "who in a tyrannical manner imposed himself upon the empire" ("qui sibi tyrannico more regnum inposuisset": Romana 338).

Glycerius may have done his best to try to be conciliatory. For example, the western court did not nominate its own consul for the year 474, and accepted the eastern nominee, the infant Leo, who served as sole consul for both east and west. But the aging Leo was not to be assuaged. John of Antioch reported, "When Leo, the emperor of the east, learned of the election of Glycerius, he appointed Nepos as general of an expedition against him" (fr.209.2: Gordon trans., pp.122-123). This was Julius Nepos, who was Master of Soldiers of Dalmatia, nephew of the patrician Marcellinus, and nephew-in-law of the empress Verina. Before Nepos could take any action, however, Leo died in January of 474, and was succeeded by his grandson, the young Leo II, who had been made Caesar in October, 473. Little Leo then made his father Zeno Augustus. This turn of events incongruously left Glycerius as the most senior of the three reigning emperors.

Glycerius appears to have had some success at dealing with barbarian threats, by both diplomatic and military means. The Gallic Chronicle of 511, for example, reports that in 473 the ambitious Visigothic king Euric (466-484) went so far as to order an invasion of Italy: "Vincentius, moreover, having been sent by king Euric like a Master or Soldiers, was killed in Italy by the counts Alla and Sindila" ("Vincentius vero ab Eurico rege quasi magister militum missus ab Alla et Sindila comitibus Italia occiditur": no.653). In this case, one notes the terminological confusion that arose after the disappearance of Roman authority: Vincentius' position was "like" that of a Master of Soldiers, but not the genuine article. It probably was in the course of this offensive, moreover, that Euric was able to occupy Arles and Marseilles, for under the year 473 the Chronicle of Saragossa reports, "In this year Arles and Marseilles are occupied by the Goths" ("His. coss. Arelatum et Masilia a Gotthis occupata sunt": Chronicon Caesaraugustanum s.a.473). The cities subsequently were briefly recovered by the emperor Julius Nepos (474-475).

Meanwhile, in 473 Italy also was faced with a barbarian threat from a new source: groups of Ostrogoths who had designs on western territory. According to Jordanes, King Vidimer proposed to invade Italy, but "the emperor Glycerius, after bestowing gifts and saying that Vidimer's relatives, the Visigoths, ruled there, transferred him from Italy to Gaul, which then was assailed on all sides by various peoples" ("quem Glycerius imperator muneribus datis de Italia ad Gallias transtulit, quae a diversis circumcirca gentibus praemebantur, aserens vicinos ibi Vesegothas eorum parentes regnare": Getica 284). One might wonder whether in this case Glycerius was able to prevent Vidimer from linking up with Vincentius and the Visigothic invasion force, a combination that could easily have resulted in a Visigothic occupation of Italy itself.

Such activities, poorly known as they are, may have resulted in the generally favorable press that Glycerius receives in the sources. The Byzantine chronographer Theophanes described Glycerius as a "not despicable man." Bishop Ennodius of Pavia (514-521) was more generous, saying, "After Olybrius, Glycerius ascended to the rule. With regard to whom I summarize, in my desire for brevity, the numerous things he did for the well being of many people. For, when the blessed man [bishop Epiphanius of Pavia] interceded, he pardoned the injury done to his mother by some men under his authority" (Vita Epiphanii 79). It has been suggested that the injuries suffered by Glycerius' mother resulted from disaffection caused by his payments to the Ostrogoths, but such measures were a regular part of imperial policy. It may be, however, that the perpetrators were soldiers, which might account for their evasion of punishment.

One of the praiseworthy actions to which Ennodius referred might have been manifested in the only law of Glycerius to survive, dated 11 March 473, addressed to Himilco, the Praetorian Prefect of Italy, and reissued to the Praetorian Prefects of Illyricum, the East, and Gaul. Glycerius, of course, was not authorized to issue any legislation either to Illyricum or to the East. The law was directed against simony, and well calculated to gain ecclesiastical approbation. And it was endorsed in the emperor's own hand: "Farewell, Himilco, most dear and beloved parent."

Julius Nepos meanwhile, who had been appointed by the now-deceased Leo to lead the eastern campaign against Glycerius, was not able to cross to Italy until the following spring. Glycerius, apparently apprised of his rival's pending advent, seems to have gone to Rome prior to Nepos' landing. This is suggested by the existence of a single small silver coin struck at Rome in his name. This coin, with the legend "VICTORIA AUGGG", attests to the existence of three emperors. The obverse legend, "D N GLYCERIUS P F AUG," indicates clearly that Glycerius considered himself to be one of the three. The other two must have been Zeno and Leo. Such an issue of coinage under such circumstances would seem to indicate Glycerius' continued claim to the imperial title, and a priori an intention to resist Nepos. If so, his plans came to nought.

In June, 474, Nepos landed at Ostia and Glycerius surrendered without resistance. In the words of the chronicler Marcellinus, "The Caesar Glycerius, who held the imperial power at Rome, was deposed from power at the port of the city of Rome [i.e. Ostia] by Nepos, son of the sister of the former patrician Marcellinus. From Caesar he was ordained a bishop, and he died." John of Antioch noted, "He took Rome, captured Glycerius without a fight and, having stripped him of royalty, appointed him bishop of Salona. He had enjoyed his rule for eight months. Nepos was immediately appointed emperor and ruled Rome" (fr.209.2: Gordon trans., pp.122-123).

The mid-sixth-century historian Jordanes, moreover, made it clear that as far as the eastern court was concerned, Nepos was the direct successor of Anthemius: "After Anthemius had been killed at Rome, Zeno, through his client Domitianus, named as emperor at Ravenna Nepotianus' son Nepos, who had been joined in marriage to his niece. Nepos, having taken legal possession of the empire, deposed Glycerius, who had imposed himself upon the empire in a tyrannical manner, and made him bishop of Salona in Dalmatia" ("occisoque Romae Anthemio Nepotem filium Nepotiani copulata nepte sua in matrimonio apud Ravennam per Domitianum clientem suum Caesarem ordinavit [sc.Zeno]. qui Nepos regno potitus legitimo Glycerium, qui sibi tyrannico more regnum inposuisset, ab imperio expellens in Salona Dalmatia episcopum fecit": Romana 338-339).

Glycerius' sponsor Gundobad, moreover, was notable by his absence. It may be that he had returned to Gaul to recruit additional forces, as could be suggested by Glycerius' apparent initial effort at resistance. Or perhaps he had other things on his mind: it also has been suggested that his father Gundioc died at just this moment, and he had to return to Gaul to ensure that he received his proper share of the inheritance (PLRE II, p.524). Regardless of the reason, Gundobad is not known to have returned to Italy.

As far as is known, Glycerius ended his days as bishop of Salona, in the heart of Nepos' homeland. In this regard, he followed in the footsteps of Eparchius Avitus (455-456), who had been made bishop of Piacenza after his own deposition at the hands of Majorian and Ricimer. Unlike Avitus, however, who abandoned his see and died soon afterward, Glycerius (contrary to the implication of Count Marcellinus) seems to have survived for some time. In the very next year, however, Nepos himself was forced out of Italy and returned to Dalmatia, making Glycerius his personal bishop. The irony of this change in fortune was not lost on Jordanes, who noted, "Nepos fled to Dalmatia, and, deprived of his power he languished there as a private person, where the emperor Glycerius recently had obtained the see of Salona" ("Nepus fugit Dalmatias ibique defecit privatus a regno, ubi iam Glycerius dudum imperator episcopatum Salonitanus habebat": Getica 241).

Even then, Glycerius may not have been able to keep his hands out of politics, for Malchus (apud. Photius 78) suggests that Glycerius himself was involved in the conspiracy to murder Nepos in 480. Whether or not this is the case, he probably was not then made bishop of Milan by Odovacar, as some modern writers have suggested.

Gordon, C.D., The Age of Attila. Fifth-Century Byzantium and the Barbarians (Ann Arbor, 1960)

Copyright (C) 1997, Ralph W. Mathisen. This file may be copied on the condition that the entire contents,including the header and this copyright notice, remain intact.