If the amount of usurpations launched against a reigning emperor are an indication of the latter’s unpopularity, or general disapproval of his government, then few Roman emperors were so universally loathed as Honorius. In less than a decade, no fewer than eight men claimed the title of Augustus in Britain (Gratian, Marcus, and Constantine III), Gaul (Constans, Jovinus, Sebastianus, Priscus Attalus’ second attempt), Italy (Priscus Attalus’ first attempt), and even Spain (Maximus, twice). The only emperor with a rottener track-record was Gallienus. The contemporary polemicist Orosius presented the series of challengers against Honorius’ government as a catalogue of tyrannorum uel inoboedientium ducum (“usurpers and insubordinate duces”).[1] One man usually mentioned among these imperial rebels is rather hard to pin down: the comes Africae Heraclianus who invaded Italy in 413 CE.

Nothing is known of Heraclianus’ early life or career when he makes his grim appearance on the historical scene. On 22 August 408, the disgraced western magister utriusque militiae Stilicho emerged from a church at Ravenna whence he had sought asylum in the wake of a junta against his regime. He surrendered to representatives of Honorius and willingly walked to his execution.[2] Heraclianus was the headsman who put to death the man who for more than twelve years had acted as the western Roman court’s helmsman.[3] Olympius, the magister officiorum who had organized Stilicho’s downfall, rewarded Heraclianus for his bloody handwork with the office of comes Africae. Heraclianus may already have served in some other military capacity, perhaps as a tribune in the scholae palatinae or protector domesticus, given that this was one of the Imperial West’s most important regional commands.

His first challenge was resisting the attempts of Priscus Attalus to wrest his control over Africa.[4] In this he was able to stand his ground, thence to strike back by cutting off Rome’s grain supply, which spelled the end of Attalus’ regime in 410.[5] Meanwhile, Heraclianus provided Honorius with funds.[6] These two deeds helped shore up the dynastic camp in Italy and the emperor would not forget this boon. Heraclianus was quickly confronted, however, with the backlash of Italian affairs since a steady influx of refugees sought a safe haven in Africa. Writing after the commander’s downfall, Jerome described him as drunk, cruel and corrupt in the matter of their plight, though the reality on the ground may have been far more complex.[7] The most important event occurring within the diocese of Africa during his stint as regional commander quickly followed with the Conference of Carthage in 411.

The council had to settle once and for all the dispute between Catholics and Donatists that had been raging for over a century. On 25 August 410, the same day Alaric’s Gothic army entered Rome, Heraclianus had already received instructions from Honorius’ court to crack down on heretics.[8] The pendulum swung in the same direction when, after much heated debate that brought Augustine of Hippo into the limelight, the imperial notary decided in favour of declaring the Donatist movement heretical. As a result, imperial soldiers under the auspices of Heraclianus had their work cut out the following years in suppressing those obstinately clinging onto the movement. Honorius and his court were altogether quite pleased with Heraclianus’ conduct as comes Africae, since they had praised his diocese at this time as maxima nostri regni pars (“the greatest part of our realm”) and rewarded him with a consulship for the year 413: the most prestigious Late Roman honour.

What should have been a year of triumph, soon turned into a year of travesty. In the spring of 413, Heraclianus set sail with an army to Italy. He landed at Rome, and started marching until Honorian forces engaged him along the via Flaminia. Orosius mentions that his fleet numbered 3,700 ships, even greater than Xerxes’ during the invasion of Greece, though he admits this is based upon hearsay.[9] Half a century later, the Spanish chronicler Hydatius was able to pinpoint Utriculum as the location of an imperial debacle that allegedly cost the lives of 50,000 men.[10] Both numbers are patently outlandish, given that far better attested revolts involving the African military (such as Firmus’ in the early 370s or Gildo’s in 398) usually ranged in the lower thousands of soldiers. Nevertheless, they do indicate that Heraclianus had marshalled all military resources he could spare for this endeavour. The result was the same all together: Heraclianus lost the battle and fled to Carthage, where he was ultimately assassinated at the aedes memoriae, a rather ironic end considering the court’s damnatio memoriae against him.[11]

Some sources provide the seemingly obvious motivation for Heraclian’s sudden volte-face: he had staged a usurpation.[12] Yet other sources fail to explicitly brand him as such, including Orosius who gives the fullest account of his revolt, whilst two mid-fifth century catalogues of usurpers in the Honorian era conspicuously do not list him.[13] Even legislation issued by Honorius’ court did not use the label of tyrannus (“usurper”) to denounce Heraclianus, but rather hostis publicus (“public enemy”).[14] Last but not least, Heraclianus did not strike any coins despite the fact that Carthage contained a mint. The minting of coins was one of the first steps any imperial upstart undertook to broadcast their aspirations. All of these considerations make it very unlikely Heraclianus ever staged a usurpation, yet still leave open the question of his bizarre behaviour in 413.

Heraclianus had thrown the Honorian regime a life-line during its struggle with Alaric, and was duly rewarded for it. Among the military aristocracy, western consulships had been quasi-exclusively awarded to senior magistri militum over the past four decades. Heraclianus was the first and only comes Africae to ever receive it. Furthermore, his was the first non-imperial western consulship after the pandemonium of the sack of Rome. Rather opaquely, Orosius comments that Heraclianus acted the way he did because he felt he was in danger.[15] The most plausible origin of this danger was the rise of Constantius [III], the new magister utriusque militiae.[16] In 412, he had already directly interfered in the diocese of Africa on the question of desertion, thus threading on Heraclianus authority.[17] More ominously, Constantius had been responsible for the removal and execution of several key players at Honorius’ court, including Heraclianus’ patron Olympius.[18] In the merry go round of strike first or be struck down, Heraclianus decided not to wait for the inevitable showdown.

The year 413 presented the most opportune moment, since Constantius was committed to a campaign in Gaul to destroy the regime of Jovinus. The western field marshal had employed Athaulf’s Gothic army towards this end in return for food supplies. However, after Athaulf had delivered his side of the bargain, Constantius was unable to make good on his and war broke out between the two parties.[19] Heraclianus was the engineer of this conflict, since he had held up grain-supplies before landing in Italy.[20] This was not the traditional annona of Rome, but rather the grain promised to the Goths. When peace was finally achieved in 416, no less than 600,000 modii of grain were delivered; a quantity that only Africa could spare.[21] Such an amount explains the vast number of ships Heraclianus set sail with to Italy, since these will have carried both grain and his army. The sheer gamble of his operation is underlined by the fact that no one had ever used the African military for a campaign in Italy, during the previous four centuries of imperial rule. Heraclianus probably intended to march on Ravenna, seize control over the court, and pressure Honorius into bringing down Constantius in similar fashion as Stilicho. Residual forces in Italy simply took no chances with this affair, however, and crushed this insubordinate army along the Via Flaminia. Heraclianus’ retainers were hunted down, his consulship revoked, and his wealth and property confiscated by Constantius (who turned out to be disappointed in the rather modest assets).[22]  Not much will have been necessary to imagine and explain the entire affair as yet one more failed usurpation against Honorius.

Heraclianus does not hold a place among the long line of early fifth century usurpers, yet his rebellion is altogether symptomatic for the flux of court politics in the Imperial West. The reign of Honorius presented a game changer in how traditional officers were supposed to align themselves in the chain-of-command. One could have provided admirable services in name of the dynasty, as Heraclianus had done, and yet still find themselves in the cross hairs of a magister militum hell-bent on establishing his control over the court. Heraclianus provides one of the earliest examples, together with his distant predecessor Gildo, that one did not have to resort to usurpation of the imperial office as the default path for political opposition. After all, the opposition of such officers was not aimed at the reigning emperor, who had become an innocuous ceremonial palace-bound ruler, but rather their senior commander. These western magistri utriusque militiae had arrogated themselves a position as leader of the imperial government, due to their control over the western military apparatus. Such a set-up would have been inconceivable under the soldier-emperors of the fourth century. Their position of authority was far more volatile, however, than a legitimately sanctioned emperor. Stilicho’s fate demonstrated that such supreme commanders could be undermined and brought down, without removing the emperor. Honorius’ reign meant the last flare-up of traditional usurpations of the imperial office. The future of the Imperial West, or rather its decay, now lay in the hands of warlords inside the western army, whose tactical use of violence or the withdrawal of force became a new tool for power-broking.

Copyright (c) 2020, Jeroen W.P. Wijnendaele. This file may be copied on the condition that the entire contents, including the header and this copyright notice, remain intact. 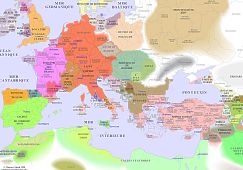