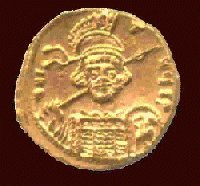 Constantine IV, born around 650, was the eldest son of Constans II and Fausta. Constans II proclaimed him co-emperor in April 654, and with his father's murder in Sicily in 668, he became emperor along with his two younger brothers Heraclius and Tiberius. He married Anastasia and had two sons, Justinian II and Heraclius. In the nineteenth century scholars believed that the nickname Pogonatos (bearded) belonged to Constantine IV, but the current view is that it referred to his father, Constans II.

Hearing of his father's assassination, Constantine IV immediately set sail for Sicily and arrived shortly after the rebellion of Mizizius had been put down. During the winter, he was able to reassert imperial authority over the troops and in the spring he brought them back to Constantinople. The first major threat that Constantine faced was the advance of the Arabs. Building upon gains made during Constans II's reign, Mucawiya attacked Sicily, North Africa, and Anatolia. Soon, it was clear to the emperor that Mucawiya was focused on bringing his forces to bear against the capital city of Constantinople itself. In 670 Arab naval forces occupied Cyzicus and established a base for future attacks against the city, and in 672 captured Smyrna. In 674 the Arab fleet began its assault upon Constantinople. With the emperor's attention focused on the Arabs, the Slav chieftain Perbundus made plans to capture Thessalonica. When Constantine learned of Perbundus' plans, he had him executed. The Slavs, angered by the execution, still attacked the city and laid siege to it.

The Arabs, continuing their assault upon Constantinople, were unable to capture the city and after blockading the city throughout the summer were forced to return to a winter base off Cyzicus. The Arab fleet returned for the next three summers until 678 when the Byzantines, utilizing Greek fire were finally able to defeat the Arab navy and force them to withdraw. Greek fire was a liquid invented by Callinicus of Heliopolis, a Christian refugee from Syria, that was pumped through a siphon onto enemy ships and that burst into flames upon contact with the timbers. The knowledge of the ingredients for making this flammable liquid was considered a state secret by the Byzantines, and was so zealously guarded that the essential elements remain unknown to this day. At about the same time as their naval success, the Byzantines were able to win a major land battle against the Arabs in Anatolia. The combination of these two victories forced Mucawiya to recall both his land and naval forces and to seek a peace treaty. Constantine IV was able to negotiate a favorable treaty with Mucawiya who agreed to pay an annual tribute of 3,000 pieces of gold.

The Byzantine victories in the East allowed Constantine to turn his attention to the western region of his empire. A Byzantine army was quickly dispatched to Thessalonica, defeated the Slavs, and lifted the siege. The Avars, impressed by the Byzantine successes, sent ambassadors to Constantinople to acknowledge Byzantine control over them. In 670, Asparuch led a group of Bulgars into lands near the delta of the Danube, which the Byzantines regarded as under their control, with the intention of eventually moving farther south into Byzantine territory. A joint naval and land force expedition under Constantine's command attempted to remove the Bulgars from the area in 680, but was unable to force a battle. When the Byzantines finally attempted to retreat from the region, the Bulgars attacked them and were able to inflict much damage upon them, turning their orderly exodus from the region into a rout. In the following year, because of the defeat, Constantine IV agreed to a treaty that recognized Bulgar control over the disputed region. The Bulgars established a capital at Pliska, and soon were able to control the Byzantines' access to the Danube. To offset this, Constantine established the theme of Thrace and settled fugitives from the Avar Khanate there as a buffer against the Bulgars. Dissension among the Arabs over control of the empire allowed Constantine to send raiding parties that sacked Ascalon, Acre, and Caesarea and recaptured most of Cilicia.

Constantine, recognizing that something needed to be done about the religious dissension in his empire, convened the sixth ecumenical council (Constantinople III) that met from November of 680 until September of 681. During its 18 sittings, 12 of which were actually led by Constantine himself, the council attempted to bring about a reconciliation between the Western Church in Rome and the Orthodox Church in Constantinople. Since the majority of the monophysite regions of the Byzantine Empire were now controlled by the Islamic Empire, the council rejected monotheletism and monenergism and their proponents. The council decreed that Christ had both a divine and human will that matched his two natures. This reaffirmed the Chalcedonian doctrine of 451. The council's actions helped to promote a feeling of unity between the two churches and bring them closer together than they had been in recent years.

Internal Threats and the end of his Reign

Constantine, concerned over ensuring the succession of his son Justinian to the throne, attempted to remove his brothers Heraclius and Tiberius from their positions as co-emperors prior to the sixth ecumenical council. This decision caused troops from the Anatolian theme to travel to Chalcedon to protest this action. The ancient sources regarding this incident suggest that the soldiers felt that just as the trinity was three in nature, so too should be the division of imperial power. Constantine, acting quickly, arrested and executed the leaders of the protest, thus quelling the dispute. He did, however, rescind his order and had his brothers reinstated as co-emperors. After the council concluded, Constantine removed his brothers from their positions, had their noses slit, and proclaimed his son Justinian II as co-emperor. The practice of mutilation by the Byzantines, which probably began in 641 with the tongue slitting of Martina and nose slitting of Heraclonas, was supposed to make the disfigured person ineligible to rule. By disfiguring his brothers in this manner, Constantine felt that he was assuring the succession of his son. This practice of mutilation , which was used to guarantee Justinian II's accession, was to play an important role in Justinian's reign. In 685, at the age of thirty-five, Constantine IV died from dysentery and was succeeded by his seventeen year old son. 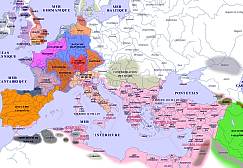